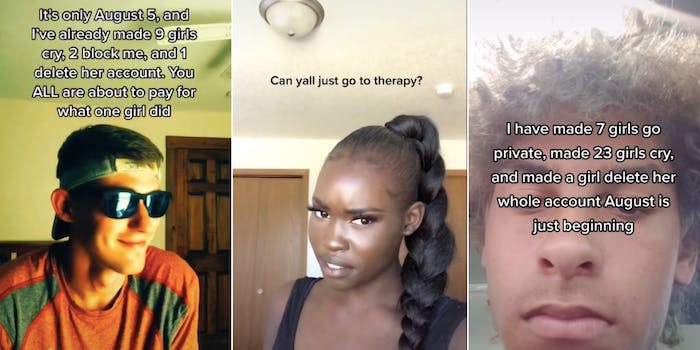 Men on TikTok are harassing women to ‘avenge’ Will Smith

Some TikTokers are trying to hijack the disturbing challenge for good.

Men are apparently still hung up about Jada Pinkett Smith’s previous relationship with August Alsina, and they’re vowing to “avenge” Will Smith by harassing women as part of a new TikTok challenge.

Think back, if you dare, to 50 years ago at the beginning of July 2020, when Jada confirmed she had a relationship with Alsina while she and Will were separated. The bombshell revelation became a cultural event and sparked tons of memes, including one of a particularly sad-looking Will Smith.

Now, some men are bragging about their incessant harassment of women in order to get “revenge” on Jada. Set to a mashup of Will Smith’s “The Fresh Prince of Bel-Air” and Twenty One Pilots’ “Heathens,” dudes are posting TikToks with captions along the lines of, “It’s only August 5, and I’ve already made 9 girls cry, 2 block me, and 1 delete her account. You ALL are about to pay for what one girl did.”

Another user upped the ante, boasting, “I have made 7 girls go private, made 23 girls cry, and made a girl delete her whole account August is just beginning.”

Hopefully, these videos are just a joke or an ironic commentary on how terrible this type of logic is. It doesn’t take a rocket scientist to figure out the challenge is pointless and disturbing as hell. (Will Smith doesn’t need your messed-up version of vigilante justice, fellas.)

Several women have commented on the grossness of the challenge as well, with @fatraco0n issuing a simple request in a video that has been viewed over 1.2 million times: “Can y’all just go to therapy?”

Lately, however, TikTokers have hijacked the “Fresh Prince”/“Heathens” mashup and flooded the sound with more positive interpretations of the challenge.

“As a member of the ‘men’ I have gotten 6 racist accounts banned, made 2 hom0phobes delete their account, and made 3 islamoph0bes go private,” TikToker @joemama_87 boasted in a video that has been viewed more than 152,000 times.

“As a member of the ‘men’… I’ve gotten 12 racists COD accounts banned, 3 homophobes fired from their jobs, outted [sic] 7 cheaters… We ain’t done yet….” @loganr.lewis claimed.

Other women have decided to hold men accountable for the terrible misdeeds committed by other members of their gender as well.

“Y’all want justice for Will smith?” @urinelover666 asked. “OK ladies, let’s get revenge for what Ted Bundy did.”

Bundy was a popular target among TikTokers participating in this new challenge, as was Chris Brown. Other men jumped on board as well, encouraging women to take them to task.

“My bestfriend just told me he cheated on his girlfriend with her best friend and if she calls me he was at my house, but she facetimed me and i couldn’t lie to her, i support ‘kill all men 2020,’” @tallskinnyali confessed.

Whether this is genuine allyship or thirsty virtue-signaling remains to be seen. Still, it’s better than men trying to “avenge” a celebrity by acting like assholes toward women.