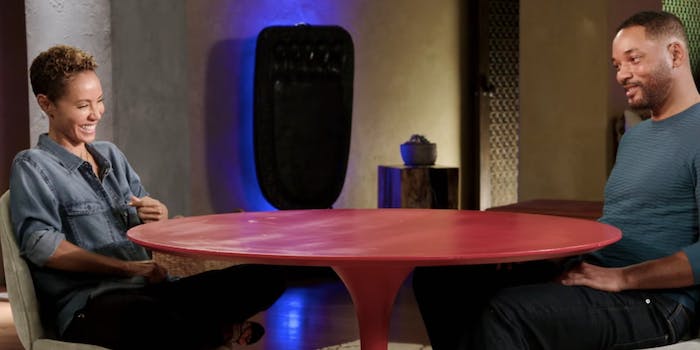 She and Will Smith hashed out the details in a new video.

Jada Pinkett and Will Smith confirmed on Friday the rumors that Jada had a relationship with singer August Alsina.

She and Will hashed out the old romance in an episode of Jada’s show Red Table Talk. The couple was separated at the time that Jada had a relationship with Alsina.

Rumors about Jada’s relationship with the singer have circulated for more than a year. Those rumors intensified in early July when Alsina confirmed their relationship during a promotional interview for his new music.

The Smiths, who have been together for 25 years, said they were going through issues around the time that Jada met Alsina. She said Alsina started off as a good friend and that she was trying to help him through a difficult time when he was in a delicate mental state. Will noted that the whole family welcomed Alsina during that period.

But not long after, the couple started to have some issues and decided to go different ways for a while.

Once they were separated, the relationship between Jada and Alsina began to change.

As they discussed the old relationship, Will pressed Jada to speak on why she got together with the singer. Jada said that she was trying to be happy and felt like fixing someone else would help. She pointed out that she’s since learned that she needed to focus on herself.

“I was in a lot of pain, and I was very broken,” she said. “In the process of that relationship, I definitely realized that you can’t find happiness outside of yourself.

The couple agreed that not too long afterward, they realized they weren’t happy separated. Jada made it clear that her relationship ended before the Smiths got back together and that she hasn’t spoken to Alsina since.

The duo never had any secrets, they said. Instead, they dealt with it head-on and “therapized” through their problems. They emphasized that it made their love for each other stronger and that they think about the time period as being in the past.

At the very end of the video, Jada was teary-eyed as they spoke about how their relationship has evolved. In the last minute or so of the video, they jokingly fist bump and say, “We ride together. We die together, Bad marriage for life.”