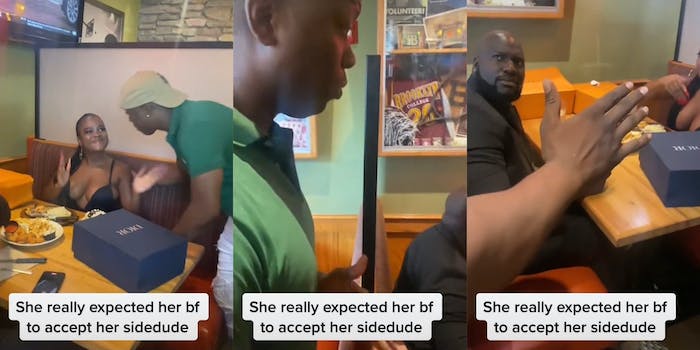 The boyfriend grabs all of the gifts he bought for her and leaves.

A recent TikTok video going viral portrays a much more likely scenario. Posted by TikToker @danieljean5656, it shows a woman and her boyfriend celebrating her birthday at a restaurant. The wait staff is serenading her with a birthday song when another man comes up to their table and tries to sit down.

The newcomer first tries to sit down next to the other man, who’s named Daniel, but he refuses to budge, so he sits on the other side. The second man tries to tell him that they’re just friends. Daniel isn’t having it, so he grabs all of the gifts he brought over for the meal and leaves.

“She really expected her bf to accept her sidedude,” the video’s caption reads.

The restaurant staff attempt to look away but also can’t help but laugh. Onlookers already have their phones out.

It’s cringe-worthy, to be sure, and the video quickly went viral. But viewers on both TikTok and Reddit, where the video was reposted in the r/PublicFreakout subreddit, aren’t convinced it’s quite real. For one, commenters pointed out the empty boxes on the table as proof that the video was staged.

But you can also go to the Instagram page linked to @danieljean5656’s TikTok account to find out that it’s staged. There, you’ll find a slightly different version of the TikTok video with “He took back his bday gift from her.”

“Based on a true story shorty invited her side dude to her bday dinner so he took his gift back,” his Instagram caption read.

That’s not to say that these kinds of confrontations never happen, even if the original isn’t caught on camera. But even a staged version is enough to evoke a similar reaction to the real thing.