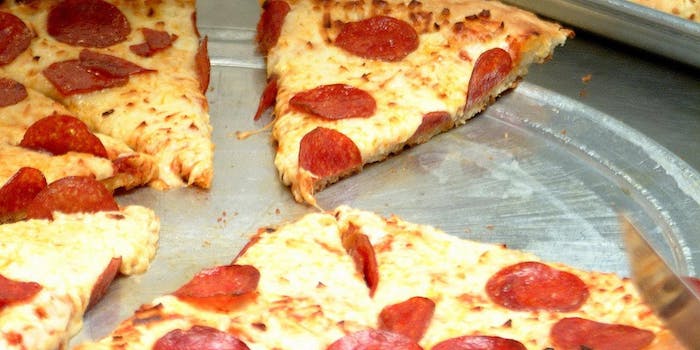 Man pits brands against each other, wins a year of free pizza

This man deserves all the pizza he can eat.

For some, greatness is destined. For others, it is earned—as in the case of a British man who played two phone companies against one another on Twitter to ultimately land a year-long supply of pizza.

Dan May is the titan in question. When he saw that British phone company O2 was running a campaign to deliver free pizzas to offices by simply replying to their tweet with a location and #waggytails, May decided he wanted a slice of the action.

Time for a slice of life. We're delivering #O2Priority 🍕🍕🍕. Leeds and London, tweet your location with #waggytails. pic.twitter.com/H5EgELf44B

But pizza never arrived. So that’s when he threatened to hop to O2’s competitor, Three.

@O2 disappointed we received no pizza. Now thinking about joining @ThreeUK instead. 🍦🍦 however would change that – 85 Newman Street W1T 3EX

Three saw the chance to gain a subscriber and pounced, letting May know that a pie and some frozen treats would be on the way to his office.

And once Three delivered on their promise, it appeared that O2 felt threatened. They eventually made an offer that May couldn’t turn down: free pizza for the rest of the year.

@dpmay We’d like to make your tail wag, how about free pizza for the rest of the year? Drop us a DM 🍕 #waggytails pic.twitter.com/PHjD3h1L2y

Rightfully skeptical of O2’s offer after already the initial botched delivery, May sent over proof of Three’s attempt to get him to change providers.

And it looks like O2 was serious about the dozen months of cheesy goodness. You know what they say: All is fair in love and war and telephone companies using pizza to build their customer base.

@dpmay No joke, check your DM! Free pizza for the rest of the year 🍕 #waggytails

Wondering how this would go down with Verizon and AT&T.