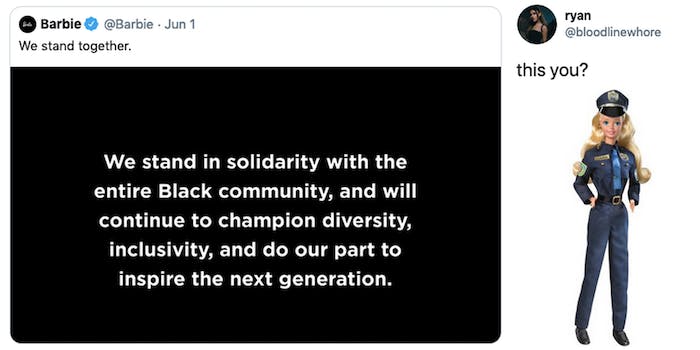 The ‘this you?’ meme calls out the hypocrisy of brands and public figures

You don't want to be caught on the receiving end of a 'this you?' meme.

When addressing heavy subjects such as racism, police brutality, gun violence, and basic human rights, brands are often put into a precarious dilemma, of sorts. Finally, this dilemma is being perfectly encapsulated in the new “this you?” meme.

To make no comment at all may seem callous, however, messages of solidarity often ring performative as best, or hollow and hypocritical at worst—given that many brands have problematic skeletons in their closet or are owned by corporations that actively lobby against the public’s best interests. And politicians and pundits are no exception, as the “there’s a tweet for everything” phenomenon rings true for public figures beyond just the president.

The “this you?” meme takes this hypocrisy to task by marrying a retweet with a contrasting screenshot for a devastating one-two punch. Take, for example, Keep It host Ira Madison III putting the Hallmark Channel on blast for an empty Black Lives Matter tweet by adding a snippet about how the family-friendly channel struggles with diversity in holiday programming.

Oher examples put Rockstar Games on blast over the racist cops in Grand Theft Auto franchise, the NYPD for its suddently sunny and supportive pro-Pride month message, as well as Laura Ingraham, Kamala Harris, and so on.

Barbie, of all things, also got called out a few times for a message of solidarity with the Black community, proving that no brand is immune from the “this you?” meme. Despite its apparent oath to “champion diversity,” users brought up receipts that Barbie is, quite literally, a cop.

And speaking of the president and “there’s a tweet for everything,” Donald Trump’s Twitter feed could be the inspiration of any one of literally hundreds of “this you?” memes. But instead, we’ve decided to go with the most lowbrow one we could find.

If you’ve got no other reason to think before you tweet, just know that there could be a “this you?” meme waiting right around the corner, ready to pounce at any given moment.