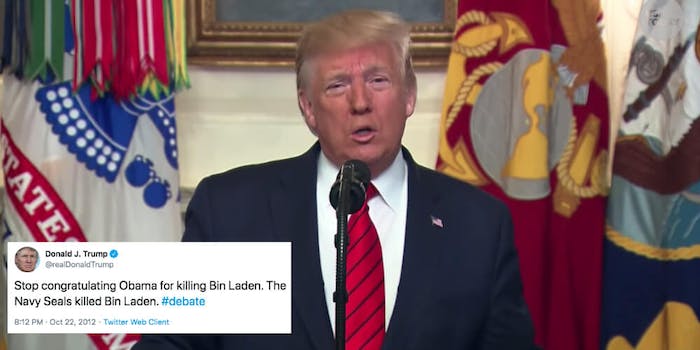 Many are also speculating that Trump's Situation Room photo is staged.

President Donald Trump announced at a press conference on Sunday that ISIS leader Abu Bakr al-Baghdadi had died by detonating his own suicide vest during a U.S. military raid. And, because there’s a tweet for everything, many dredged up one from 2012.

“Stop congratulating Obama for killing Bin Laden. The Navy Seals killed Bin Laden. #debate,” Trump tweeted at the time. He was referring to the death of Al Qaeda leader Osama bin Laden who was killed by U.S. Special Forces during a raid in 2011–when Obama was in office.

This is why many are finding the irony in what is being dubbed boastful remarks by the president.

Even on Saturday night, Trump tweeted, “Something very big has just happened!”

Trump Today : “How can they impeach me, I killed Baghdadi.”#Baghdadi https://t.co/cPYHN9HiGp

Meanwhile, the White House released a “Situation Room” photo on Sunday that many are speculating is staged.

“It was something really amazing to see,”‘ Trump said of the raid during the press conference. “I got to watch it along with the general, Vice President Pence, and others, in the Situation Room. We watched it so clearly. … I don’t want to say how, but [it was] as though you are watching a movie.”

“The raid, as reported, took place at 3:30PM Washington time. The photo, as shown in the camera IPTC data, was taken at ’17:05:24,'” Pete Souza, the White House photographer for Presidents Obama and Reagan, tweeted.

It wasn't enough to announce the killing of #alBaghdadi. They had to do a STAGED Situation Room photo. trump was golfing when the kill happened.

I prefer the one w/President Obama and VP Biden looking intense, and Hillary looking worried.

THAT shit was REAL. pic.twitter.com/PaQG7qK8Vz