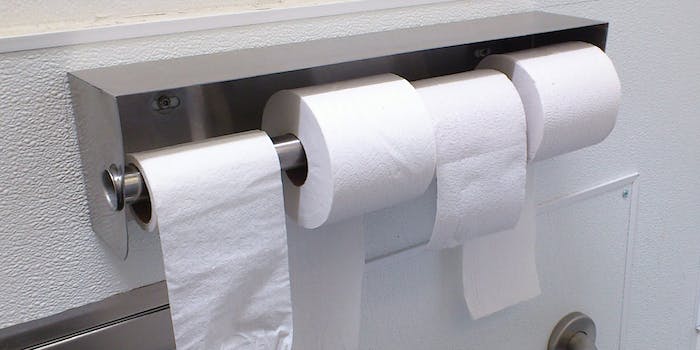 When you replace a roll of toilet paper in your bathroom, which way do you position it? Everyone has their own thoughts on how it should be replaced on the bathroom holder, especially if you don’t use one of those strange toilet paper tower setups. For most of the world, the over/under toilet paper positioning debate has raged on for centuries. There will never be a definitive or “correct” answer.

If you hang your toilet paper “over,” the paper will face you, presumably while you’re on the pot. If you decide to place it in the “under” position, the loose paper you can grab will instead face the cabinet or wall, or whatever your toilet paper holder is near. While the “over” method is widely used by toilet paper connoisseurs, so is the “under” position. No one can ever agree on which way is truly the “right” way, and thus we see fights breaking out online over it all the time.

So when Tinder user Hana Michels tweeted out her Tinder profile picture that clearly defines her as part of the “under” camp, we can understand why she might have upset folks using the service.

Michels’ photo is one of her making a funny face while brushing her teeth in what’s presumably her bathroom, and the caption “WHO LET YOU IN HERE???” to tie it all together. She’s had her Tinder profile for a year, according to her tweet, and in that time she’s had 23 people contact her to tell her how “wrong” her toilet paper positioning is.

Michels’ tweet garnered some pretty heated responses on Twitter, too. It’s a legit concern! This is an Extremely Important debate, and her toilet paper decisions need to be discussed. That’s why she’s earned over 800 responses from a single tweet. Not about her strange Tinder profile photo decision in general, but…the toilet paper positioning. Serious business.

Some people used the toilet paper holder’s patent to let her know she was in fact wrong.

Others were just straight up savage.

I mean, they're not wrong. Your hanging method is clearly an affront to god.

If you were trying to attract men, I would say your profile is working.

The positioning, however, isn’t incorrect to some. Especially if you have cats, as this user pointed out.

If you have cats, the correct way is always under. pic.twitter.com/HPklNVPQ8f

Even Michels’ roommate joined in on the ribbing.

As your friend I say, “fuck them” but as your roommate I say, “they have a point.”

And others? Well, some people just want to watch the world burn.

This is the only correct way to have the toilet paper pic.twitter.com/pbY1vyXE0M

Time to start evaluating how you personally position your toilet paper, especially if you’re in the market to post any bathroom selfies in the future.