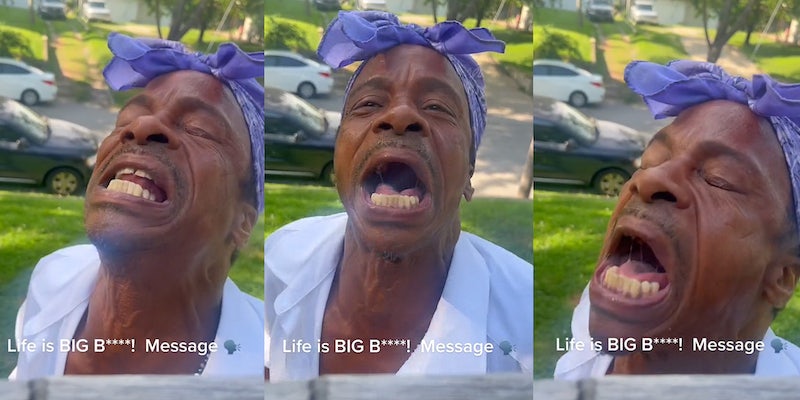 'The delivery is hilarious but the message is strong.'

If you’ve been trying to manifest something or psych yourself up recently, this week’s viral TikTok sound is the perfect accompaniment.

The audio’s been used in more than 14,000 TikToks, and several people have turned it into a mantra for motivation and manifestation. “POV: me dreaming about calling out of work the next day but I should just quit instead,” one TikToker wrote.

It was also used to inspire the next generation.

The original TikTok was posted on July 22 by Larolyn Hayes-Dodd, and it has more than 4 million views. It features a man known as “Unc” dispensing the “lesson of the day” in a front yard. Hayes-Dodd has since posted other videos of Unc, who has an Instagram account under the name Unc Frisco Reece Official.

One commenter summed it up: “The delivery is hilarious but the message is strong.”

Hayes-Dodd also posted the full “think big” video on YouTube, and the comments are full of viewers saying Unc is a daily inspiration.

Taraji P. Henson and Big Boi both shared the TikTok, and Ciara used another Unc sound, which has also gone viral.

Update 8:30am CT, Aug. 9: Hayes-Dodd tells the Daily Dot the original TikTok is older, but came from a daily meetup of friends: “This particular day, we were talking about how we limit ourselves as individuals. I began to state how the key to any idea or one’s success, is taking it to its highest of your capabilities. It’s either go hard or don’t go at all. Unc chimes in and says, ‘Now bitch that’s thinking big!'”

As for the response, Hayes-Dodd says they’re “still in awe at the outpour of love Unc is receiving and the positive impact it is having across the globe. It’s truly amazing.”