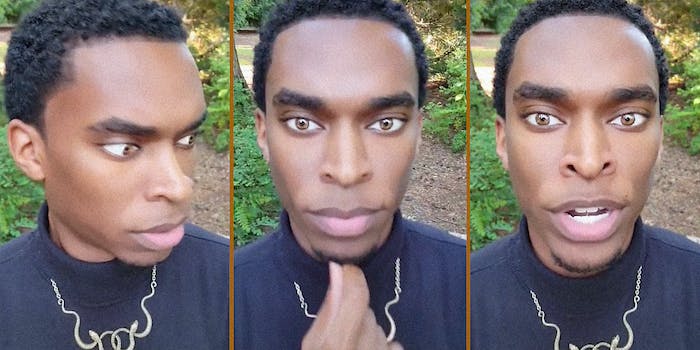 And he has a message for H3 Podcast.

“There is no such thing as a coincidence,” according to William Knight.

This mantra informs the TikToker’s open-air videos, in which he stares, often unblinking, into the camera and offers vague affirmations. But one video in particular has become inescapable. (Likely because the FYP is feeding it to you.)

While Knight has been using TikTok since October to promote his daily affirmation app, Grand Rising, he went viral outside the app last week when a TikTok titled “Hack your subconscious mind” was posted to Twitter. It racked up more than 8 million views, thanks to a well-placed scream and Knight’s intense delivery. It also became a copypasta trend.

As Know Your Meme points out, people compared Knight’s delivery to NPCs from The Elder Scrolls IV: Oblivion, and there were other gaming references.

Knight has other TikToks about time travel, UFOs, and lucid dreaming. Further back are videos about mermaids and Bigfoot. But he tells the Daily Dot that he’s not doing a bit here: “I am very serious when it comes to my TikToks, and very passionate about what I say.”

Knight doesn’t have any formal training; his “affirmations and manifesting techniques come from years of studying and practicing the ideas on my own.” The Grand Rising app has mostly positive reviews in the App Store, though one complaint seems to be getting automatically charged for subscriptions.

While he says he didn’t anticipate being turned into a joke or meme, Knight shared some memes on his account. His mantra has become something of a fixture on the h3h3productions subreddit, after the H3 Podcast highlighted some of his videos in May.

When asked about the video, Knight is somewhat cryptic: “Trisha and Courtney are not our only connections. I am excited for [Klein] and his viewers to stumble upon our biggest synchronicity.”