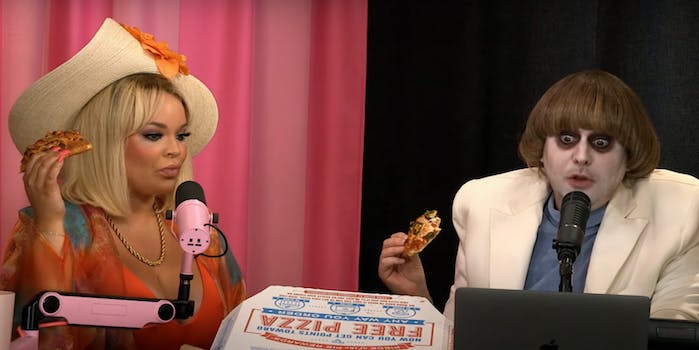 Is this really the end of 'Frenemies,' a podcast built on feuds?

Trisha Paytas announced on Tuesday that they are quitting the popular Frenemies podcast co-hosted by Ethan Klein, due to disputes over ownership and creative input.

In a YouTube video, Paytas, who identifies as non-binary, explained that they feel uncomfortable not having an equal creative relationship with Klein. “I really do feel like I built this show with them,” they say.

Paytas came to the Frenemies podcast, which is produced under Klein’s h3h3 Productions banner, in September 2020 after beefing with him on social media and his H3 Podcast. In spring 2020, Paytas started dating Klein’s brother-in-law, Moses Hacmon, which caused more drama.

In a thread about the exit, writer Kelsey Weekman details how Frenemies grew out of their fractious relationship and became “a platform for them to work on their relationship AND call out influencers like Shane Dawson, Jeffree Star, James Charles, and David Dobrik.”

The podcast is very popular, in large part because of Paytas, who is no stranger to internet drama. On Monday night’s Frenemies episode, Paytas talked about their creative contributions to the podcast, and critiqued a new Q&A segment as “dumb.” Klein was dismissive, saying, “You just show up, we do all the work.”

In that episode, there was also a discussion about revenue in front of the crew. Paytas asked why they can’t have Frenemies “employees” when a percentage of revenue goes to the H3 production crew. In a follow-up video, they say a new hire apparently came up with the Q&A idea that Paytas called dumb, which they say they didn’t know.

Klein responded to Paytas’ announcement, saying their video was “a total surprise” and that he “did everything I humanly could to save” the podcast.

Many fans said the conversation about salary and revenue should have taken place in private.

Klein later said he “erased most of my recent tweets regarding trisha,” which included one about H3 crew getting “hate” from Paytas’ fans.

This isn’t the first time Paytas claimed they were leaving Frenemies. In December, they walked off the show after getting into a dispute with Klein regarding talking about his wife, Hila (Hacmon’s sister), on the podcast. So there’s a possibility this isn’t the end.