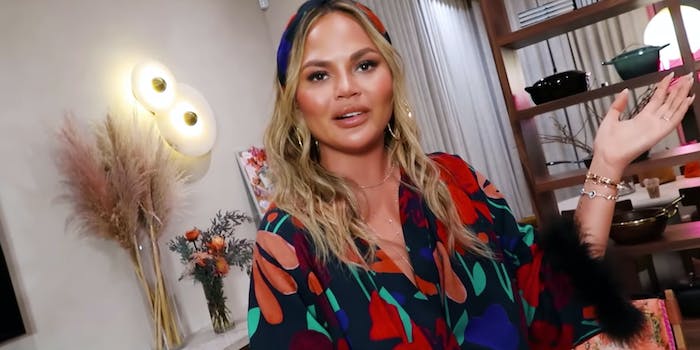 Teigen is accused of urging Stodden to kill themself when they were only 16.

In a four-part Twitter thread posted on Wednesday, Chrissy Teigen apologized to Courtney Stodden after being accused of cyberbullying the then-teenager in 2011.

“I’m mortified and sad at who I used to be,” Teigen wrote. “I was an insecure, attention-seeking troll. I am ashamed and completely embarrassed at my behavior but that is nothing compared to how I made Courtney feel.”

“I have tried to connect with Cortney privately, but since I publicly fueled all this, I want to publicly apologize,” she continued. “I’m so sorry, Courtney. I hope you can heal now knowing how deeply sorry I am.”

While Teigen said she reached out to Stodden privately, Stodden claimed otherwise in an Instagram post uploaded hours later.

“I accept her apology and forgive her. But the truth remains the same, I have never heard from her or her camp in private,” Stodden wrote.

Stodden said Teigen blocked them on Twitter, sharing a screenshot as proof.

“All of me wants to believe this is a sincere apology, but it feels like a public attempt to save her partnerships with Target and other brands who are realizing her ‘wokeness’ is a broken record,” Stodden said.

Tiegen’s apology comes after Stodden said in an interview with the Daily Beast on Monday that Teigen harassed them on Twitter years earlier.

Screenshots of the since-deleted tweets show Teigen fantasizing about Stodden taking a “dirt nap” and saying that Stodden should “go to sleep forever.”

“[Chrissy Teigen] wouldn’t just publicly tweet about wanting me to take ‘a dirt nap’ but would privately DM me and tell me to kill myself. Things like, ‘I can’t wait for you to die,’” Stodden said in the interview.

Teigen was a well-established cover model in her mid-twenties, while Stodden was still around 16 at the time of the tweets and DMs in question. Stodden, who rose to fame in 2011 after 50-year-old actor Doug Hutchison married them when they were only 16, recently opened up about the alleged abuse they faced throughout their marriage as well as the poor treatment they received from the media, fellow celebrities, and overall public.

“And not only (Teigen), but Joy Behar had a field day with calling me a ‘slut.’ Courtney Love told me I was a ‘whore.’ People came out of the woodwork to beat up on a kid because she was in a situation that she shouldn’t have been in. There were a lot of celebrities acting like playground bullies. Some of the worst treatment I got was from women, and we’re not going to get anywhere if we keep holding each other back,” Stodden said in the interview.

Many people online, along with Stodden, are not buying Teigen’s apology.

And some are taking the opportunity to demand that Teigen apologize to Quvenzhané Wallis, whom, in 2013, Teigen seemingly called “cocky.”

According to Showbiz Cheat Sheet, Wallis had just won the Best Dressed award at the Oscars when Teigen tweeted of the then-9-year-old: “Is it okay to call a small child cocky?”

“I am forced to like Quvenzhané Wallis because she’s a child right?” Teigen later doubled down. “Okay fine.”