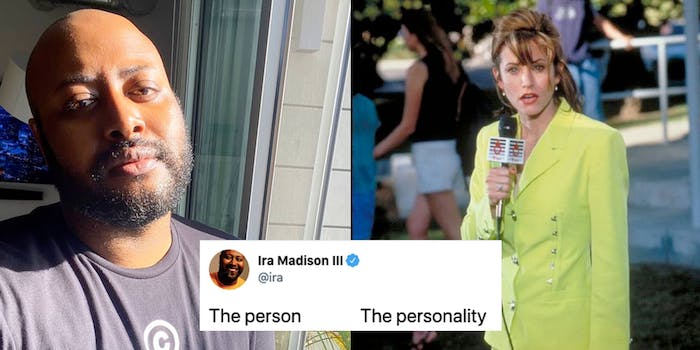 As Mark Twain famously once said, “It’s not the size of the dog in the fight, it’s the size of the fight in the dog.” For the uninitiated, this quote generally means that fierceness is not necessarily a matter of physical size, but rather indicative of mental or psychological attitude. And as it just so happens, it’s also somewhat derivative of a new “the person, the personality” meme currently trending on Twitter.

Maybe an individual happens to be demure and diminutive on the outside, yet boasts a ferocious intensity that would throw most strangers for a loop. Or, on the other side of the coin, sometimes the seemingly toughest guy in the room also has the biggest heart. (Looking at you, The Rock! 👋) As such, this meme gives people the perfect opportunity to show the world what’s on the inside.

For example, in the case of the Keep It host Ira Madison III, what’s on the inside just so happens to be plucky investigative reporter Gale Weathers from the Scream movies (as portrayed by actress Courteney Cox).

Others compared themselves side-by-side to characters such as the Cheshire Cat from Alice and Wonderland, Gal Gadot’s Wonder Woman, Whoopi Goldberg from Sister Act, and uh, the post-singing career Whitney Houston—just for starters.

Lin-Manuel Miranda chose his own DuckTales alter-ego, Fenton Crackshell-Cabrera, for his version of “the person, the personality” meme. Not sure if this technically counts but we’ll give it to him anyway.

One person used “the person, the personality” meme to drag RuPaul—no pun intended—who has drawn criticism over the years over his flippant attitude when it comes to the trans community. So, in this context, RuPaul’s personality is … George W. Bush?? Eh, checks out, actually.

Hate to see the person become the personality, in an instance like this—but for everyone else, let your inner freak flags fly, whatever that may entail!