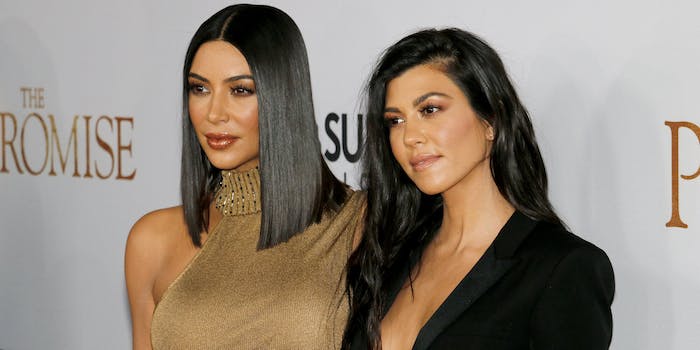 A trailer for season 18 of Keeping Up With the Kardashians revealed a dramatic fight between Kourtney and Kim Kardashian, and fans can’t get enough.

The latest season airs this week, which means the public has yet to see the official episode. The teaser for the season was apparently enough for fans, however, who quickly took to the web to share their reactions to the clip. In the trailer, which is narrated by Khloe Kardashian disguised as Kris Jenner, a long-brewing argument appears to boil over between the siblings.

The clip doesn’t show enough of the preceding conversation to reveal what spurred the fight. It appears, however, that Kourtney informing Kim “you have nothing to say,” may have urged the sisters to come to blows. Both siblings were clearly riled up, as Kim responded by telling her sister “don’t ever come at me like that.”

That’s when things got really good. “I will fuck you up, you literal cunt,” Kourtney yelled back, before flinging a bottled drink at her nearly 40-year-old sister. Several clips showed the two tussling as Khloe attempted to wrench them apart before Kim dismissed her older sibling. “Just get the fuck out of here. I don’t even wanna see your fucking face,” she said. In response, Kourtney shouted back “I don’t want to be near your fat ass,” before departing the room.

The dramatic clip quickly made the rounds online. Fans of the series were immediately hooked on the brief brawl and threw their support behind their favorite sister. Kourtney was the clear crowd favorite. “So Kourtney gave Kim a gluten-free ass whoopin,” one commenter wrote.

Many commenters pointed out that Kourtney, as the eldest Kardashian, had every right to put her little sister in her place. “Kourtney is the Queen and Khloe and Kim are her bitches,” one person wrote. “FACT.”

Everyone else used the opportunity to make jokes about the ongoing feud between Kim, her husband Kanye West, and Taylor Swift. As far as many of them are concerned, Kourtney is officially #TeamTaylor. “Kourtney Kardashian leaked the footage and is a Swiftie, I won’t hear otherwise,” one commenter said.

Old drama resurfaced this week after Variety released the footage at the center of a years-old fight between Kardashian and Swift. In case you don’t remember: In 2016, Swift took issue with some of the lyrics in one of West’s songs. The lyrics “I feel like me and Taylor might still have sex / Why? I made that bitch famous,” bothered Swift, who said she felt blindsided.

In response, Kim released a clip. It revealed a small portion of a conversation between Swift and West, in which Swift appears to give the lyrics her seal of approval. In the opinion of the web, the clip was law and for years Swift was effectively canceled by much of the internet.

Last weekend, however, the full conversation came out. It revealed that Swift was, as she claimed in 2016, unaware of the “bitch” reference in West’s lyrics. The reignited drama was all the inspiration many memers needed, and the clip of Kourtney and Kim’s fight soon became a Swift-centric meme. “Why the fuck did Kourtney rock Kim’s a$$ like that,” one person said. “She lowkey did that shit for Taylor.”

Given that the internet is a messy bench who loves drama, the latest season of Keeping Up With the Kardashians couldn’t come at a better time.