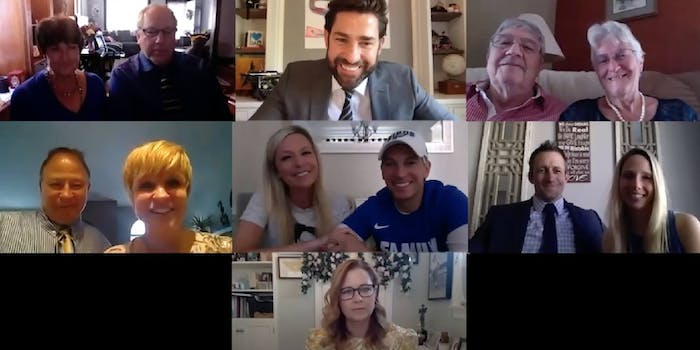 The Dunder Mifflin dysfunctional family sets aside its petty grievances to celebrate true love in the form of a hilarious, heartfelt dance down the aisle—and this week, the cast of The Office recreated the iconic scene for two newlyweds.

The Office’s John Krasinski spotlighted the couple, Susan and John, on his new web show, Some Good News. John recreated Jim’s onscreen proposal—or, as Kraskinski put it, “elegantly ripped off our show for your proposal”—getting down on one knee outside of a Wawa gas station and asking Susan to marry him.

Of course, being stuck in the middle of a quarantine has thrown a wrench into a lot of couples’ wedding plans, and Krasinski decided to help the lovebirds out by throwing a digital ceremony.

Krasinski got ordained to marry the couple and invited their family and best friends to take part in the Zoom ceremony. He also recruited country star Zac Brown to perform a new song titled “The Man Who Loves You The Most.”

That would have been enough for a one-of-a-kind ceremony in itself, but Krasinski did one better when he invited his Office costars to the call as well. Steve Carell, Mindy Kaling, Rainn Wilson, Angela Kinsey, Ed Helms, Jenna Fischer, Kate Flannery, Brian Baumgartner, Phyllis Smith, Oscar Nunez, and Creed Bratton all showed up to bust some ridiculous moves (and, in Meredith’s case, show off a bottle of booze) to the tune of Chris Brown’s “Forever.”

It was a delightful gesture on Krasinski’s part that proves love in the time of quarantine isn’t so bad after all. Hopefully Susan and John get to take a Maid of the Mist boat tour when life returns to normal.