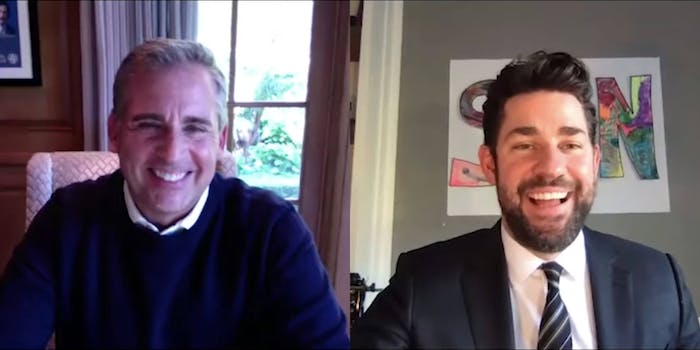 John Krasinski debuted his new web show, Some Good News, yesterday in an effort to combat all the negativity in the world with some uplifting news. The programming slate included the 15th anniversary of The Office, which Krasinski revisited with a little help from his old co-star Steve Carell.

Before that, though, Krasinski ran through a list of good news sourced from fans on Twitter. Highlights included the heroic acts of healthcare workers around the world, a man who left rolls of toilet paper and bottles of hand sanitizer on his porch as a thank-you for delivery drivers, and a marriage proposal that took place in Paris, Virginia, because the couple couldn’t fly to France as originally planned. (She said yes.)

Krasinski pivoted to The Office halfway through the episode, and he and Carell discussed the impact the series had on their own lives. Krasinski, who played lovesick slacker Jim Halpert, said he was waiting tables when the pilot episode shot. “I was 23 years old, I was a waiter, and after the pilot, I went back to waiting tables because I was sure nothing was gonna happen with it,” he said. “We all kind of came into it with that vibe. I remember none of us had done anything huge.”

Carell—who played Michael Scott, the bumbling, goodhearted boss of Dunder Mifflin’s Scranton branch—praised the camaraderie among the entire Office cast. “Part of what was so much fun about it is that everybody in the cast was rooting for everybody else,” he said. “People would step back when it was time for other people to shine and celebrate it.”

Both actors reflected on series highlights, including their one-on-one exchange in Carell’s final episode where they both struggled to say a word without crying. They also looked back on the notoriously cringeworthy “Dinner Party” episode, where Michael and Jan invite Jim and Pam over to their apartment and Michael shows off his micro “plasma TV.” In the blooper footage, all four actors burst into hysterics when Carell goes to swivel the TV and barely moves it an inch.

“I don’t think I’ve ever laughed that hard in my life,” Krasinski said of the scene.

With Carell and Krasinski still on good terms, does this mean Office fans can expect a reunion in the future? Both actors broached the subject, but they were more concerned with catching up as friends. “Hopefully one day we just get to reunite as people and just all get to say hi,” Krasinski said. Carell responded, “Just to see your face is so great.”

As Carell signed off the first episode of Some Good News, Krasinski bade farewell to his old co-star with a word of encouragement: “I really think you’re gonna make something of yourself, Steve.”