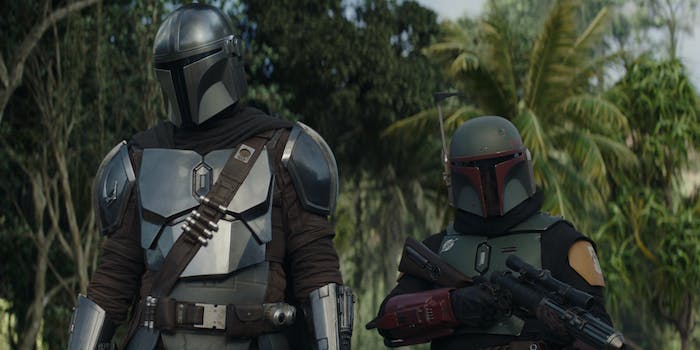 Din Djarin takes a few drastic steps to get his son back.

The stories that the Star Wars universe tells are often grandiose tales of good versus evil or ones with Force wielders and Galaxy-wide implications; it’s rare when we catch glimpses of what entities like the Empire or the New Republic have on smaller folk. And while The Mandalorian taps into that more often, the most recent episode saw the most explicit (and fascinating) look at how the greater war of the galaxy affects everyone else.

That comes in the form of ex-Imperial sharpshooter Migs Mayfeld (Bill Burr), who returned in full form in “The Believer.” After being sentenced to prison for his role in last season’s prison break, he’s recruited into helping Din Djarin find a way to locate Moff Gideon, who’s holding Grogu captive. It’s yet another high-stakes mission, one that involves him and Din hijacking an Imperial combat assault transport with highly volatile rhydonium on it, sneaking into an Imperial refinery on Morak, and accessing a terminal that would locate Moff Gideon’s star destroyer.

For the first time, it involved Din taking off his beskar armor for something more conventional: a stormtrooper uniform. But he still covered his face

“Everybody’s got their lines they don’t cross until things get messy,” Mayfeld noted. “As far as I’m concerned, if you can make it through your day and still sleep at night, you’re doin’ better than most.”

It would eventually involve them both crossing even more lines in the name of rescuing Grogu before the leadup into the season 2 finale, but chances are, they won’t lose any sleep over it.

“The Believer” isn’t the first time Din Djarin has been seen without his mask; IG-11 took it off for him in the season 1 finale in an attempt to save Din’s life. Din was dying, and because IG-11 wasn’t a living creature, it didn’t count as breaking his creed. (Plus, IG-11 died soon after healing Din, so it’s not like IG-11 could’ve told anyone.) But this time around, Din willingly took off his mask in the name of saving Grogu.

The logic was simple. Mayfeld feared being recognized by his former commanding officer and the terminal with the location of Gideon’s star destroyer needed a facial scan to work. So, he did it.

Valin Hess saw Din’s face, as did Mayfeld. But Valin Hess is dead, as are many of the stormtroopers on Morak who saw him. By his own creed, he’s no longer Mandalorian, but if nobody’s around to confirm it, does it still count? And is there an exception to the rule if he took off his mask to save his own foundling?

A perverted celebration and the greater good

We’ve seen post-battle celebrations in just about every iteration of Star Wars you can imagine, no matter whether it’s a small skirmish or the fight for the survival of your cause. There is both relief and mourning all at once from the survivors able to fight another day. But when we witness the Empire celebrating a victory, something about it just feels wrong.

Some of the images are the same as Din and Mayfeld arrive at the refinery, but there is a strangeness to it all. Not because of Din or Mayfeld’s past but rather because we’re rarely given this close a glimpse into a victory by the Empire.

It didn’t stop with the cheers and salutes of stormtroopers, though. Valin Hess offered Din and Mayfeld drinks because out of all the transports carrying rhydonium, theirs was the only one to reach the refinery. Hess isn’t too bothered. He has faith that the Empire will persevere because, thanks to the disarray of the New Republic, it’s only a matter of time before people will want the “order” of the Empire again.

According to Mayfeld, he was on Burnin Konn during Operation: Cinder—the plan Emperor Palpatine had in place to ensure that the Galactic Empire and all of its enemies didn’t survive that was enacted after his death—and lost his entire division (around 5,000-10,000 people) in an instant. But Hess’ complete disregard for the vast human sacrifice that the Empire’s foot soldiers made— “Well, it’s a small sacrifice for the greater good, son,” Hess replies dismissively—disgusted Mayfeld, and as they toasted to the Empire, Mayfeld shot his former commanding officer down.

And then, for good measure, Mayfeld shot at the rhydonium so the Empire couldn’t use it to make another Burnin Konn happen, an act that both allowed Mayfeld to sleep at night and ultimately prompted Cara Dune to let him go.

Where was Grogu this week? We can’t entirely say because, well, the little green guy—who is now openly being referred to as Din Djarin’s son—wasn’t in this week’s episode. But he might be reunited next week if Din’s threat to Moff Gideon is any indication.

It’s a rather familiar threat at that. It’s the same thing Moff Gideon once said to Din on Nevarro. After getting away from the Imperial refinery, Din recorded a transmission just for Gideon to let him know that he was on his way and that Gideon would pay.

“You have something I want,” Din says. “You may think you have some idea of what you are in possession of, but you do not. Soon, he will be back with me. He means more to me than you will ever know.”

The words are more or less the same (with the exception of a new sentence) but with Din now uttering them, it changes the meaning of the threat completely. For Moff Gideon, Grogu was just a creature and an asset with untold power Gideon could use at his disposal. But for Din, he’s speaking of something much more meaningful: Grogu is his family and he’ll do anything to get him back. And that makes next week’s likely confrontation even more personal than it already was.