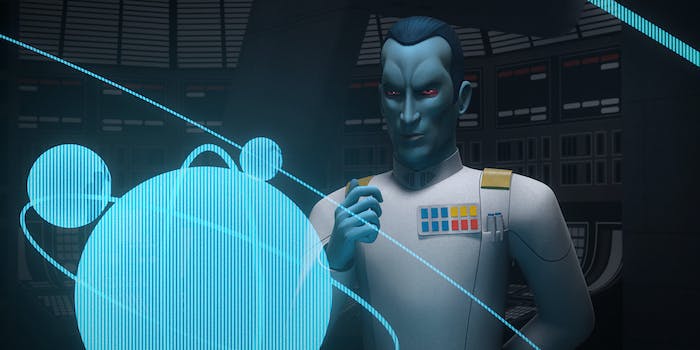 Who is Grand Admiral Thrawn and how does he tie into ‘The Mandalorian’?

His legacy spans from the Expanded Universe books to 'Star Wars Rebels.'

The Mandalorian is more than familiar with the connective tissue that ties it together with the rest of the Star Wars universe, and its latest outing is no exception. But in an episode that introduced Ahsoka Tano to live-action and referenced Order 66, Anakin Skywalker, and Master Yoda, it’s a brief name-check that offers even more possibilities.

Toward the end of “The Jedi,” Ahsoka Tano and Din Djarin are able to infiltrate Calodan, a gated city on Corvus ruled by Magistrate Morgan Elsbeth. A cruel leader who would rather kill hundreds of her own citizens than give up vital information to Ahsoka, Morgan Elsbeth initially offered Din a spear made of pure beskar in return for killing Ahsoka, which played into the antagonistic relationship that the Jedi and Mandalorians often had with one another. Instead, Din and Ahsoka teamed up to take her out, which ended in a duel that pitted two white lightsabers against that beskar spear. While one of Ahsoka’s lightsabers was knocked into a small pond, Ahsoka ultimately proved to be victorious. Holding a lightsaber to Elsbeth’s neck, Ahsoka only had one question in mind.

“Where is your master?” Ahsoka asked. “Where is Grand Admiral Thrawn?”

We don’t learn the answer to that question, at least not in this episode; we might not learn the answer in this season. We technically don’t even know if Ahsoka gets an actual response. But the question lingers over the episode’s remaining minutes as Ahsoka instructs Din to take Grogu (aka Baby Yoda) to Tython, which has a temple with a strong connection to the Force.

For some casual Mandalorian viewers, the name Thrawn might not ring any bells, although, as was the case with Ahsoka, they might know that someone named Thrawn appeared elsewhere in Star Wars canon. But Mitth’raw’nuruodo—or as he’s known to most people, Grand Admiral Thrawn—isn’t just a character who’s appeared in a children’s animated series. The Chiss officer, who’s part of a species who live in the Unknown Regions (and were mostly unknown before Thrawn made his entrance in the galaxy far, far away) has already made an impact across multiple mediums. And if the name-drop is any indication, he might eventually show up again.

Ahsoka Tano, who started off as Anakin Skywalker’s apprentice and became both a fan favorite and a powerful Jedi in her own right, was first introduced in the Clone Wars movie that would lead into the Clone Wars TV show. To find Thrawn’s introduction to Star Wars, we have to go back to the Star Wars Expanded Universe.

Thrawn made his first appearance in Heir to the Empire, a 1991 Star Wars novel by Timothy Zahn. Taking place five years after the Battle of Endor (and coincidentally takes place around the same time as The Mandalorian), it introduces Thrawn as a skilled and calculating Imperial warlord who attempted to wrestle power back from the fledgling New Republic with the help of a smuggler and Mara Jade, a Force-user (and Star Wars fan favorite) who eventually turned on the Empire and married Luke Skywalker.

Heir to the Empire became a New York Times bestseller, and, according to Fantha Tracks editor-in-chief Mark Newbold, the novel “jumpstarted a publishing program that endures to this day and formalized the Expanded Universe.” Two more books in the original Thrawn trilogy (Dark Force Rising and The Last Command) from Zahn followed, which expanded on the characterization of Thrawn as a military mastermind who leaned on his soldiers’ knowledge to create a vast plan to take back the New Republic that almost works.

Two more books in the original Thrawn trilogy (Dark Force Rising and The Last Command) from Zahn followed, which expanded on the characterization of Thrawn as a military mastermind who leaned on his soldiers’ knowledge to create a vast plan to take back the New Republic that almost works. Thrawn dies at the end of the Thrawn trilogy, but that didn’t stop the Star Wars Expanded Universe from exploring other aspects of Thrawn’s life in works such as Outbound Flight, which introduced Thrawn’s full name; Crisis of Faith, which works as a prequel to Heir to the Empire; Choices of One, which was set between A New Hope and Empire Strikes Back; and The Hand of Thrawn books that explore the Chiss officer’s legacy.

Like every other character in the Star Wars Expanded Universe from Mara Jade to Jacen and Jaina Solo, Thrawn was among those designated as part of Star Wars Legends. While books such as Heir to the Empire would still be published, they would now include a new label that would differentiate them from the official Star Wars canon.

The move was meant to streamline Star Wars canon—which had become vast, contradictory, and impenetrable to many fans with countless books and comics published in the nearly four decades since A New Hope’s release—prior to the launch of the sequel trilogy, but it received backlash from fans all the same. Over time, filmmakers would include small aspects of Legends into the official canon, such as Force healing, an ability that Rey, Ben Solo, and Grogu have all used.

But Thrawn couldn’t stay out of the fray for long. In 2016, Dave Filoni (who wrote and directed “The Jedi”) announced that Thrawn would be reintroduced to Star Wars canon as a major villain in Star Wars Rebels’ third season. Lars Mikkelsen, who played Charles Augustus Magnussen in Sherlock’s third season, joined the cast to voice Thrawn.

“You couldn’t have grown up a Star Wars fan without encountering Thrawn in Heir to the Empire,” Filoni explained. “It was a dark time when there weren’t any more movies, and it blew our minds that there could be more.”

Unlike characters such as the Grand Inquisitor, the Seventh Sister, Maul, or Darth Vader, Thrawn wasn’t a character who was strong in the Force. But the grand admiral, whose ability to anticipate his opponents’ next move led to him becoming a major thorn in the side of the young Jedi Ezra Bridger and the Ghost crew, held his own. He loomed over the occupations of Ryloth and Lothal, chased the Rebels to Atollon and Mandalore, and made it one of his missions to take out the Ghost crew.

That culminated in a final confrontation between Ezra and Thrawn aboard the Chimaera, Thrawn’s ship in the Rebels series finale. Thrawn’s efforts to destroy Lothal were thwarted, and after Ezra summoned a group of purrgil, the creatures transported Thrawn, Ezra, and the Chimaera into hyperspace.

But, as was the case with Zahn’s original Thrawn trilogy, that hasn’t stopped the Star Wars books from expanding what we know about Thrawn. Zahn returned to pen a new canonical Thrawn trilogy that, at one point, sees him paired with Anakin Skywalker and later Darth Vader. A second trilogy, titled Thrawn: Ascendancy, explores more of Thrawn’s origins.

Where is Thrawn now—and what does that mean for Grogu?

As far as we know, Thrawn disappeared into hyperspace with Ezra, and by the end of Rebels, which fast-forwards through the Rebellion itself, both of them are still missing. In the final scene of the series, an older and wiser Ahsoka arrives on Lothal to meet up with Sabine Wren—a Mandalorian Rebel fighter who was part of the Ghost crew—to pick up the search for Ezra.

In that instance, Thrawn isn’t mentioned. At that moment, Sabine’s focus on Ezra is likely more because of Sabine’s emotional ties to her found family and the sacrifices that Ezra made for Lothal over any implications that Thrawn was dead or disappeared entirely. But it’s an opening that Star Wars has yet to explore—and in Ahsoka’s timeline, five years pass between that journey and when she meets Din and Grogu.

There’s no indication that Thrawn will eventually make an appearance in The Mandalorian, although Ahsoka’s name-drop suggests that he’ll show up at some point. (And in 2019, Mandalorian creator Jon Favreau didn’t rule it out.) But that leads us to even bigger questions. Did Ahsoka and Sabine find Ezra, and if so, was Thrawn with him when they did? If Thrawn escaped his ship and the purrgil, where did he go—and what happened to Ezra? What kind of danger could Thrawn still possess? And how much of this information does Ahsoka, who has yet to formally meet Thrawn, already know?

At the end of “The Jedi,” Ahsoka refuses to teach Grogu the ways of the Force and tells Din to take Grogu to Tython and place him “on the seeing stone at the top of the mountain” so he can choose his path forward.

“If he reaches out through the Force, there’s a chance a Jedi may sense his presence and come searching for him,” Ahsoka explains. “Then again, there aren’t many Jedi left.”

While it’s highly unlikely that Luke Skywalker, the most famous Jedi around, would answer Grogu’s potential call—and given what we know happens to both Luke’s temple and his students a little over a decade later, we probably don’t want him to—Ezra could be someone who’s both familiar with audiences and who could answer Grogu’s call. (And if Ezra is still tied to Thrawn, that could bring Thrawn and Ahsoka back into the mix.)

It’s also just as likely that The Mandalorian, lest it rely on outside connections more than it already has, introduces a new Jedi to the mix. Because, if the revelation of Grogu’s origins at the Jedi Temple in Coruscant in “The Jedi” is any indication—along with others like Ahsoka, Caleb Dume, and Cal Kestis over the years—Star Wars is no stranger to introducing even more Jedi who somehow survived Order 66 to the grander story.