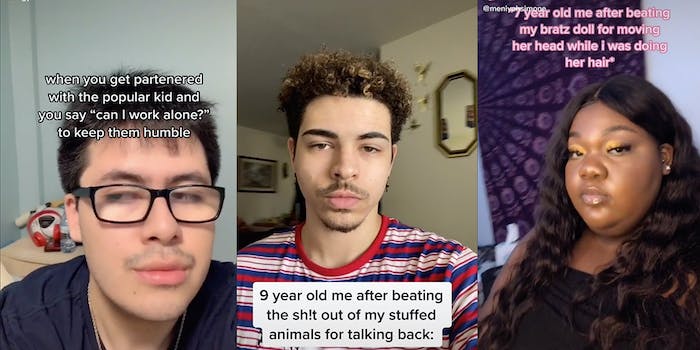 'Nine-year-old me after beating the sh*t out of my stuffed animals for talking back.'

The viral “that’s just what gangstas do” TikTok trend is the latest meme on the platform that has people making comedy out of everyday experiences.

Likened by Know Your Meme to the “damn, it feels good to be a gangsta” memes that previously surfaced online, people are using the new trend to play into nostalgia and make light of their boldest moments. Most people who partake in the trend reminisce about what they believe to be their most savage childhood moments.

The viral video that sparked the trend shows user @spicydoug panning across his face in slow motion. His very serious facial expression juxtaposes the caption: “9-year-old me after beating the shit out of my stuffed animals for talking back.” The clip plays over a short snippet of singer-songwriter Kehlani’s song “Gangsta,” which appeared on the soundtrack of Marvel‘s Suicide Squad and contains the lyrics: “That’s just what gangstas do.”

Following a similar format, the video quickly spread into a trend on the platform. Over 10,000 similar videos have been created with the original sound included.

While the meme format helped to repopularize the song on TikTok, according to Know Your Meme, the first well-known use of the song’s clip came from user @emmywithlove.

In her video, she is seen tricking users into thinking she would transition from a regular mirror selfie video into a “thirst trap.” “I got you! You thought this was a thirst trap. No, not on my Christian Minecraft server,” she says.

“No, I’m kidding. It’s a thirst trap,” she then says before jumping up and subsequently appearing in a new outfit.

While using the same Kehlani song as the “that’s just what gangstas do” meme, @emmywithlove’s original sound is referred to on the platform as “thirst trap intensifies – I can’t breathe.” Her video has been viewed over 2.3 million times on the platform, and over 15,000 videos have been created using her original sound clip.

Kehlani‘s song currently touts 198,509,767 streams on Spotify and remains as one of the singer’s most-streamed tracks to date.