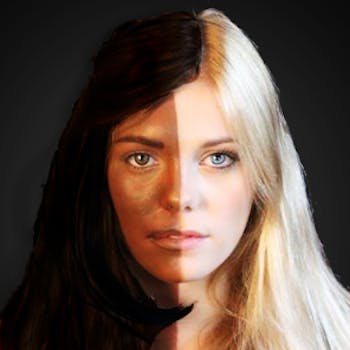 Revealing Eden, the first book in the Save The Pearls series for young adults, features a white actress in blackface. And that's just the trailer.

For several weeks the YA blogosphere and Goodreads communities have been quietly seething over racist themes in a recently published novel by author Victoria Foyt.

It was a fire that smoldered until respected media watchdog Racebending broadcast the issue to Tumblr last week, sending book lovers into a frenzy. Yesterday, Foyt dismissed her (thousands) of critics, telling CTV News that she believed criticism came primarily from “members within the African-American community who have not read the book.”

Revealing Eden is the first in a series called Save the Pearls, and it tells the story of a dystopic society where black citizens, dubbed the “Coals,” rule over marginalized white citizens called “Pearls,” described in the novel as “the racist term for whites.” Foyt argues that the novel explores complex themes of race; but that doesn’t quite explain the website, where the book’s trailer greets you with a white actress—in blackface.

“I reek of inferiority,” she earnestly tells the viewer, over occasional flashes of the character sans makeup, blonde hair flowing past her shoulders as she pensively reads a volume of Emily Dickinson.

On YouTube, the video has been viewed nearly 15,000 times. The only visible responses are all positive, and all fake; TeenQueen161, 666ScreamQueen, HopePritch96, extimamatt, and helinacolour are all sockpuppet accounts evidently set by the author to comment on her own promotional videos.

Foyt used a similar ploy on The Huffington Post, where she posted a rebuttal to accusations of racism. But she was unable to stem the flood of criticism that came last month when she posted an article called “White and In the Minority” to Goodreads:

“However we get there, eventually, the majority will be non-white, and the actors, models, teachers and politicians will reflect the new status quo.

Perceptions of beauty also will likely change. Access to jobs and education will probably shift too. And possibly, past cycles of prejudice may replay … with the tables turned?“

Considering that “past cycles” of racism are still in effect for millions of people today, it’s hardly surprising the post was greeted with skepticism.

“It’s a sad state of affairs when an author thinks that a novel can only make a point about racism and prejudice if the protagonist is white,” commented Goodreader Ashara, who added a moment later, “Oh, shit, and your marketing campaign is blackface. How do you not realize this is racist?”

Foyt clearly believes her book is strong enough to withstand reader criticism. After all, despite accusations of fabricating reviews, her book did win the Eric Hoffer award for best self-published Young Adult novel of 2012, and the book has received accolades from City Book Review, the LA Book Festival, and each of the other reviewers listed on her website. But the sockpuppetry, disabled comments, and misleading marketing have not inspired faith from readers that she has the ability to handle complex race relationships. And then, of course, there’s the blackface.

It also doesn’t help that the book describes its male protagonist, a Coal, as “a beastly man,” or that Foyt’s primary descriptions of her main character’s experience with institutional racism seem to involve her not being considered pretty enough to “mate.” We also learn that, like “Pearl,” the word “Coal” itself is a highly “incendiary racial slur,” yet both protagonists use the words to identify themselves, their races, and each other throughout the book.

These marginalizing interpretations of actual racism undermine the novel’s fictionalized racism, which consists of very literal role reversals. The main character is forced to dye her skin dark “or risk antagonizing” the ruling class; voluptuous women with “raisin-colored skin” now “scream ruling-class.” The effect is bizarre, despite Foyt’s belief that her book can serve as a moral lesson.

“Do you feel ugly, or hopeless?” the protagonist asks other Pearls in the book trailer.

If the book blogosphere’s reaction is anything to go by, ugly and hopeless describes the mood around Revealing Eden perfectly.

Photo via Save the Pearls