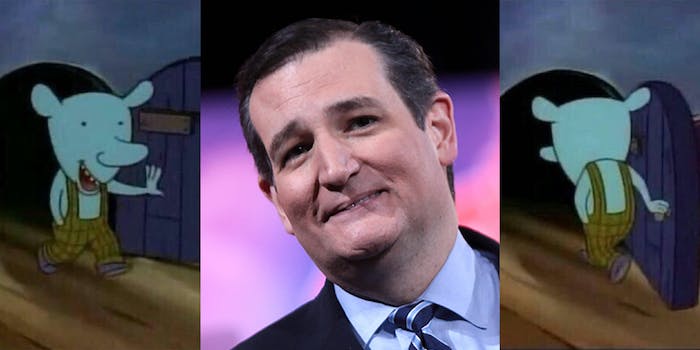 Ted Cruz gets roasted after posting a CatDog meme

Ted Cruz can't even get away with making fun of bad BBQ.

Sen. Ted Cruz (R-Texas) desperately wants to be funny. He once did an impression of Dana Carvey from the Senate floor, and who could forget his hilariously unfunny satirical Christmas commercial?

The lack of laughs hasn’t stopped Cruz, though. He’s back at it again, and this time he tried sticking to something every Texan believes themselves to be an expert in: BBQ.

Recently, a California company called BBQ Hero introduced a mail-order brisket, and Texas-based magazine Austin 360 wanted to know how Texans thought it would stack up to their homegrown variety.

You can probably guess how the good people of Texas reacted.

I'm sorry, what did u just say? pic.twitter.com/wkzQxLkxVp

Looks horrible keep it on the West Coast

If that doesn’t get the point across, here’s the face of the reporter they made try the stuff.

With all the shade being thrown at the BBQ Hero, Cruz thought he might as well get in on the fun, so he posted this meme of Winslow from the cartoon CatDog.

Hey @california, you can keep your brisket. You can have @tedcruz though.

No hard feelings. We'll send some real BBQ with him.

fixed it for you pic.twitter.com/TFmh9EPbWD

A few people did step up to say they thought it was a good use of the meme, but they were also quick to note they still think Ted Cruz sucks.

It seems that California brisket, and Senator Ted Cruz, have one thing in common. Apparently, people find both hard to stomach.