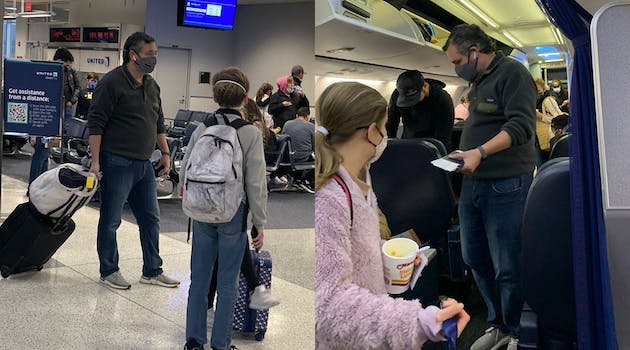 In a statement, the Texas senator said he was escorting his daughters on a trip.

Sen. Ted Cruz (R-Texas) just made one of the most unpopular choices of an already-controversial career: In the midst of catastrophic weather and days-long power outages in his home state, he allegedly got on a flight to Cancun, Mexico. According to an MSNBC reporter, they were traveling to a resort. A mid-pandemic, mid-energy-crisis vacation.

Update Feb. 18, 12:25 p.m. CT: A statement from Cruz’s office that was released to the media confirms that the senator did board a flight to Cancun on Wednesday to escort his daughters on a trip with friends. “Wanting to be a good dad, I flew down with them last night and am flying back this afternoon,” he said in the statement. He added that he was in “constant communication with state and local leaders to get to the bottom of what happened in Texas.” Still, people noted that he brought a suitcase and a bag on the flight and did appear to plan to stay longer in Cancun than one night.

Several photos surfaced on Wednesday night, showing Cruz (or someone who looked virtually identical to Cruz) in an airport and on an airplane. Initially posted by a Twitter user named Juan Gomez, the photos were publicized by Keith Edwards, a former Lincoln Project employee and current advisor to Georgia senator Jon Ossoff. The pictures seemingly showed Cruz and his family on the way to Cancun. According to Edwards, “multiple people” messaged him to say Cruz was on their flight on Wednesday.

The photos spread quickly on Twitter. While there was still a chance that the photos were misleading (for instance, older pictures reposted to look like they were new), they clearly depicted the real Cruz due to his distinctive greying hair and grey mask. MSNBC reporter David Shuster has since confirmed that Cruz and his family did fly to Cancun on Wednesday, traveling to “a resort they’ve visited before.” So this is indeed a vacation.

Other tweets point out that a person named “CRU, R.” is on a standby list for a United Business flight from Houston to Cancun on Wednesday afternoon. Cruz’s full name is Rafael Edward Cruz, so this matches up. Fox News has even confirmed that Cruz did in fact travel to Cancun.

Cruz hasn’t responded to the photos, which went viral among infuriated Texans overnight. Over on his official Twitter account, Cruz’s last tweet was several hours before the first airport photos appeared online. Since then, he has only retweeted posts from other accounts, including a tribute to Rush Limbaugh. If the photos really were some kind of mistake, one would expect his team to quickly step in and post a correction, nipping the scandal in the bud.