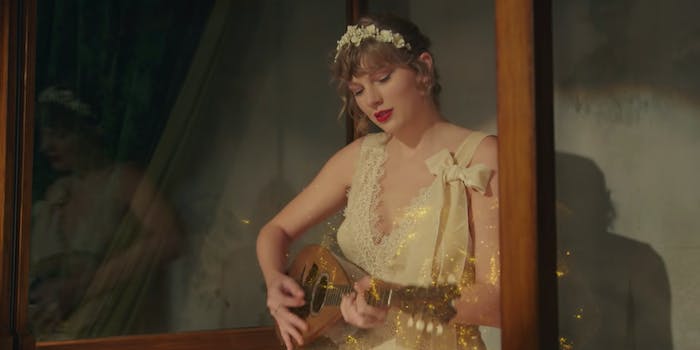 Fans made a strong argument for its existence.

Last week, Taylor Swift once again stunned the internet with the surprise release of evermore, her ninth studio album—and her second album in five months after folklore’s surprise release in July. But could there be hints of a third surprise album hiding in plain sight? That’s what some fans believe, but Swift is already shutting that idea down.

Swift described evermore as a sister album to folklore, noting that it came into fruition amid working on folklore with Jack Antonoff and The National’s Aaron Dessner. Given their close link, evermore is full of ties and nods to folklore; visually, the “willow” music video is almost a direct continuation of where “cardigan” left off.

But looking for Easter eggs hidden within Swift’s albums is nothing new for fans, who have long delved deep into the lyrics of her songs to piece together the meaning and connections between hits and albums (beyond trying to cipher who she might be singing about in a particular song). So when some fans noticed the word “woodvale” faintly printed on the top right-hand corner of folklore’s album cover, they got excited about a potential third album.

The basic gist is that woodvale, which is also the name of a large estate in the Lake District (which Swift refers to in folklore’s bonus track “the lakes”), if it exists, is part of a trilogy of albums. The name appearing on folklore’s album is the biggest piece of evidence. But one thread hints at how Swift’s shop features items coming in threes (with two of those items being aligned with folklore and evermore) and the phrase “the story continues” attached to the “willow” music video, which ends with the start of another beginning.

Another hint? In the recent folklore concert film that arrived on Disney+ in late November, Swift mentioned a “trilogy of three” before correcting herself to say “trinity of three” while discussing one of the songs with Antonoff and Dessner. In that moment, she’s referring to the trilogy of songs on folklore—“cardigan,” “august,” and “betty”—that depict three sides of a love triangle. But some fans thought she was instead talking about a secret third album.

Some fans also pointed to the inclusion of a calendar in a Spotify Wrapped video about folklore in which a Post-It note reading “It still feels like March” on a December 2020 calendar is shown. Because of the Post-It note’s placement next to the number five, some fans believe that woodvale would be released on March 5, 2021 (which falls on a Friday).

It’s a theory that Jimmy Kimmel subscribed to, so when Swift appeared on his show Monday night to promote evermore, he had the chance to ask her about it.

After giving an explanation of how she’ll often plant hints and Easter eggs in her work, she added that in this case, she took it too far and made a mistake.

“Basically, when I was making folklore—the album that came out back in July—I was too afraid to even unveil the title of the album to even my closest teammates and management,” Swift explained. I didn’t tell anyone the album title right before it came out. And so I came up with a fake code name that had the same amount of letters as folklore, chose a random name, chose ‘woodvale,’ wanted to see how it would look on the album covers, mocked them up, and then decided, ‘I don’t actually wanna have a title on the album covers,’ and we forgot to take the fake code name off of one of them.”

She went on to explain that evermore’s code name was “November,” so it’s not even the first time she’s had a code name for a secret album of this nature.

For now, Swift seems to have quelled the woodvale rumors, but not everyone is convinced.

For now, Swift fans will have to wait and see. If there’s yet another Swift album in March, they’ll be vindicated. And if there isn’t? Well, they still got two pretty great albums in the span of five months.