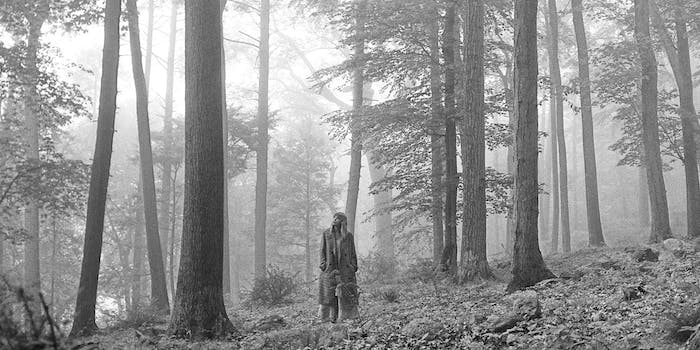 The new album, dropping at midnight, is called 'folklore.'

Taylor Swift surprised fans by announcing Thursday that folklore, her eighth studio album, will be released at midnight.

Swift, whose previous album releases have usually been accompanied by the release of several singles and music videos, a press tour, major profiles, and a tour announcement, is forgoing all of that this time around. And while most of her summer plans fell through because of the coronavirus pandemic, she described folklore as “something I hadn’t planned on that DID happen.”

“Tonight at midnight I’ll be releasing my entire brand new album of songs I’ve poured all of my whims, dreams, fears, and musings into,” Swift wrote in a message to fans. “I wrote and recorded this music in isolation but got to collaborate with some musical heroes of mine.”

Even though Swift wrote and recorded folklore in isolation, that doesn’t mean that she made the album alone. Some of her collaborators include longtime collaborator Jack Antonoff; The National’s Aaron Dessner, who co-wrote 11 of folklore’s 16 songs; William Bowery, who co-wrote two songs; and Bon Iver, who co-wrote and is featured on the song “exile.”

“I’ve rarely been so inspired by someone and it’s still hard to believe this even happened—these songs came together in such a challenging time,” Dessner wrote on Instagram of his collaboration with Swift.

She debuted the names of all 16 songs on Twitter (including the name of a bonus track for physical albums) and revealed that her first music video will be for the song “cardigan.” (There’s actually a cardigan that fans can purchase on Swift’s website that includes a digital preorder for folklore.) According to Swift, the music video shoot included a medical inspector and a crew that kept their distance and wore masks while Swift did her own hair and makeup.

For fans, the imminent release of folklore is a welcome surprise. But the collaborations with Dessner and Iver are giving people even more reason to be excited about the new album. Taylor Swift memes quickly followed the announcement.

“Before this year I probably would’ve overthought when to release this music at the ‘perfect’ time, but the times we’re living in keep reminding me that nothing is guaranteed,” Swift wrote. “My gut is telling me that if you make something you love, you should just put it out in to the world. That’s the side of uncertainty I can get on board with.”