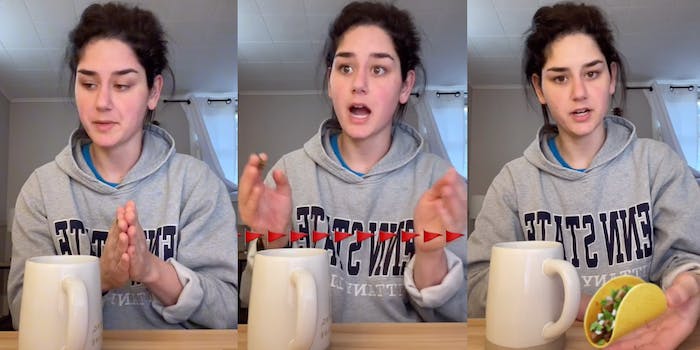 ‘You will never hear from me again’: TikToker tricked into buying 100 Taco Bell tacos on ‘worst first date’

There was no second date.

There’s nothing quite like a humorous bad first date story, and one TikToker is captivating her audience with her fascinating and unique tale.

Elyse Myers (@elysemyers) told viewers on Oct. 6 that back when she was still using dating apps, she started talking to a guy who wanted to meet up for dinner. Red flags were all over the place, including the fact that he asked her to come to his house so he could drive them to the restaurant instead of just meeting there. But when she got there, he claimed to have lost his car keys, leaving her the designated driver.

“Should I have just left him there and gone home? Yes. Did I? Absolutely not,” Myers says.

After the guy gave her turn-by-turn directions rather than just tell her where they were going, the two wound up in a Taco Bell drive-thru. Another red flag, one might say, but Myers was already in too deep to turn back now.

When they reached the window, she says her date leaned forward and ordered a full 100 tacos. And you can guess who got stuck with the bill.

Myers’s story continues from there, involving awkward conversations with her date’s father back at the house and a narrow escape back to her car with 94 tacos, but it’s a tale so well told that it’s best to hear it straight from her.

And it certainly captivated the internet. In four days, the video has racked up over 13 million views on TikTok.

“@tacobell uhm this would be an amazing Super Bowl commercial, we apologize for the short notice,” @crystalboyer4 suggested.

“Plot Twist: He mistook the dating app for UberEats, and was too embarrassed to say anything,” joked @grabnarthewanderer.

Even the official Tinder TikTok account chimed in, writing, “ok as @tinder I’ve heard A LOT of bad dating stories but as of 10/7/2021 this one is top 10.”

Myers’s video was so popular that it even prompted two follow-up Q&As about the taco conundrum.

Myers said the Taco Bell employees didn’t seem to mind the large order, much to her dismay. She had hoped someone, employee or the date, would stop the order, but no one did. Instead, after 15 minutes, they received their hard shell tacos.

Taco guy himself doesn’t seem to have come forward to explain himself or any of the wild decisions he made the night, but Myers did mention that people have sent her money on Venmo, unprompted, to belatedly help cover the cost of 100 tacos—which she calculates was over $139.

Sometimes, the internet is alright.

The Daily Dot has reached out to Myers via TikTok comment.