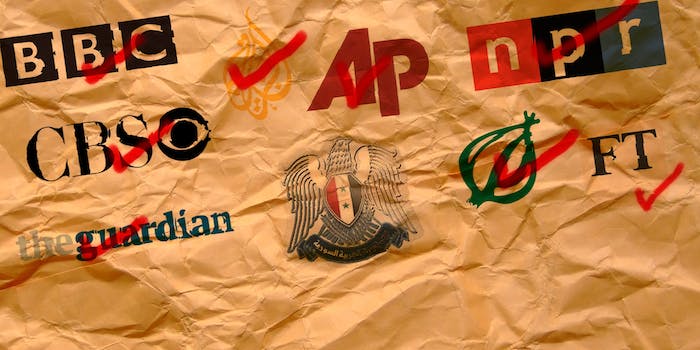 The Syrian Electronic Army has claimed yet another victim. This time, it's the Financial Times.

You would think that after the same hacker group took over the Twitter accounts of nearly every major English-language news organization using the same, relatively simple method, the rest would wise up.

The Syrian Electronic Army (SEA) has claimed yet another victim. This time, it’s the Financial Times.

In recent months, the SEA has hacked accounts belonging to the BBC, NPR, the Guardian, CBS, and Al Jazeera. Most notoriously, in April, it hacked the Associated Press’s Twitter account. There, it posted a false message that President Obama had been injured in an attack on the White House, which temporarily caused the Dow to drop a whopping 145 points.

Seventeen FT Twitter accounts, by the SEA’s count, were suddenly strongly in favor of the Syrian government on Friday morning. As screengrabbed by the Verge, accounts like @FTworldnews tweeted messages like “Jabhet A-Nosra [rebel group] terrorists executed innocent citizens,” along with video.

Each of those accounts appears to have been restored, save a few still suspended by Twitter.

The Syrian government is still in a vicious civil war with rebel factions, of which jihadist front Jabhat al-Nusra is only one. The SEA, which appears to have tacit government support, has a clear pattern of attack: find press outlets, get access to their Twitter or Facebook account (usually through a phishing attack). Its ensuing messages usually either promote president Bashar al-Assad’s regime or condemn rebels.

Earlier in May, the Onion joined the ranks of those who’d fallen victim to the SEA’s schemes, then posted an explanation of how the attack happened. In essence, it would have been easily avoided if a few Onion employees hadn’t fallen for a sketchy email asking for their Google login credentials. (Note to readers: Don’t give anyone but Google your Google login credentials.)

It’s unclear if the FT fell for this same ruse, though it’s the most common method SEA has used to breach its recent victims.

“The leadership of the Syrian army-mail announces its success in penetrating the Financial Times site,” it declared in Arabic and translated into English via Google Translate.

The hack was “a continuation of us delivering the voice of right to all parts of the Syrian land, and the need to punish anyone tempted to tamper with our country and tarnish its image of civilization,” it claimed.