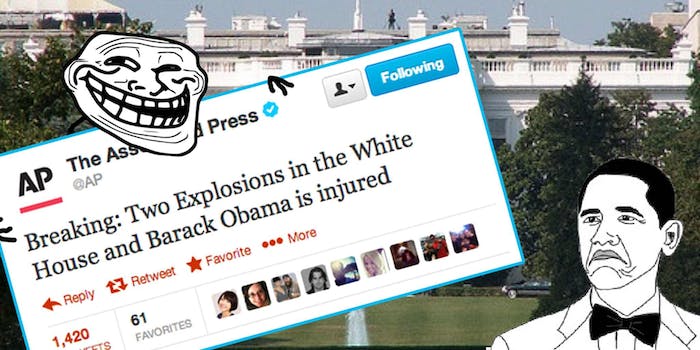 Barack Obama was not injured in a White House explosion

The Associated Press reported Tuesday afternoon that there had been two explosions at the White House. It looked fake, and it was.

The Associated Press reported Tuesday afternoon that there had been two explosions at the White House and President Barack Obama was injured. The report caused momentary panic. Others brushed it off. It looked fake, and it was: The AP’s Twitter account, @AP, had been hacked.

Sharp-eyed reporters noted that the tweet was not sent in AP style (“Breaking” was not in all caps; “Explosion” should be in lowercase) and pointed out the offending tweet was sent from Twitter’s website, not the social media management dashboard the AP typically uses.

The AP hack follows other recent high-profile takeovers of news organizations’ Twitter accounts, all seemingly perpetrated by the Syrian Electronic Army (SEA). The group, which is loyal to Syria’s ruling Assad regime, compromised Twitter accounts belonging to CBS News and soccer governing body FIFA over the last few days. Update: The SEA is now taking credit for the hack.

The SEA has also taken over the Twitter accounts of BBC Weather, NPR, France 24, and Agence France-Presse in recent months.

Update: The AP reported the incident occured after hackers made several attempts to steal passwords from AP reporters. The tweet also caused a momentarily sharp drop in the Dow Jones Industrial Average.