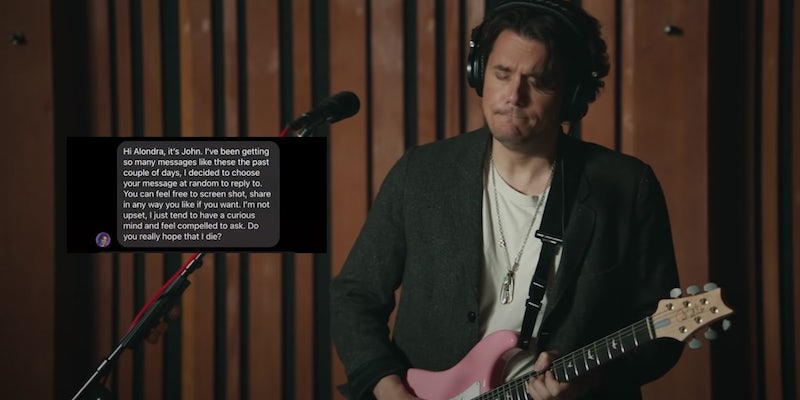 ‘Do you really hope that I die?’: A Swiftie sent hate to John Mayer on Instagram—and he responded

Amid all the Jake Gyllenhaal ire after Taylor Swift released her 10-minute version of “All Too Well,” a song that references her brief relationship with the actor, some of Swift’s fans are preemptively trolling John Mayer. Swifties are anticipating Swift’s re-release of Speak Now which features the song “Dear John” about Mayer.

One fan may have taken it a bit too far after she sent hate to Mayer via Instagram message. She showed the note in a series of viral TikToks, one of which received 11,000 likes before all videos were set to private. Although the videos are no longer viewable, the DM has made its way to Twitter and Deuxmoi.

“Fuck yourself you ugly bitch I hope you choke on something,” @hoeforlouaylor to Mayer via Instagram direct message. The teen topped the sentiment off with a heart, and another message: “answer me you bitch.”

Much to her surprise, Mayer apparently responded.

“I’ve been getting so many messages like these the past couple days,” he allegedly wrote. “I’m not upset, I just tend to have a curious mind and feel compelled to ask. Do you really hope that I die?”

Mayer also said that he picked @hoeforlouaylor’s message at random and told her that she could share their conversation in any way that she’d like.

@hoeforlouaylor posted a follow-up video showing that she apologized to Mayer via a voice message.

“My friend literally dared me to do that,” she said in the recording. “She’s a Taylor fan and like so am I. It was a dare. I’m sorry. I did not expect you to see.”

@hoeforlouaylor wrote in the overlay text of the follow up that she apologized because she “wasn’t trying to get sued.”

Mayer said it was okay, and asked: “So it’s a fun thing people are doing without taking into account that I might see it and be affected by it?”

@hoeforlouaylor reiterated that no one thought he’d see it.

This isn’t the first time that Mayer has acknowledged the hateful messages he’s received from Swifties: Upon his debut on TikTok, Swifties referenced the lyrics to “Dear John,” a song by which Mayer has said he was “humiliated” by.

“People are going to be 1000x meaner when [Speak Now (Taylor’s Version)] is released,” @hoeforlouaylor warned Mayer in her final message to him. “So take care of yourself.”

According to the TikToker, Mayer didn’t respond.

The Daily Dot has reached out to a representative for Mayer and @hoeforlouaylor.