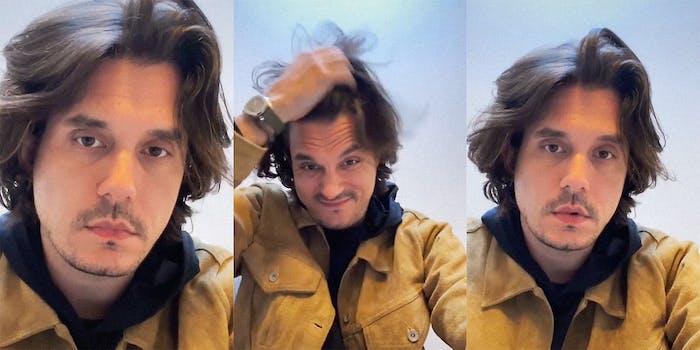 John Mayer is having to answer to Taylor Swift fans. Well, in TikTok form.

The musician posted his first TikTok on Monday, a chaotic piece of content that showed him struggling to figure out his camera. The caption: “How do use tik tok ## how do you use tik tok google.con how to use tik tok.”

Mayer is 43, so yeah, TikTok isn’t going to be easy for him. But he had another issue: Taylor Swift fans jumping in his comments to roast his technical skills and call him out for his rumored relationship with Swift when she was 19 and he was 31. The 2010 song “Dear John” is allegedly about Mayer, and the comments were also flooded with lyrics from it. Mayer told Rolling Stone in 2012 that the song made him “feel terrible” and that it was a “really lousy thing for her to do.”

“Bestie this is not a safe space for you,” read one comment.

But Mayer’s second TikTok seemed to address, or at least acknowledge, these criticisms. He engaged in the POV trend, nodding behind a caption that reads, “POV: You’re berating me and I’m hearing you out.”

Swifties were pulling double duty on Monday, defending Swift after she responded to a misogynistic line from Netflix’s Ginny & Georgia about her dating history. So was Mayer’s timing way off, or was it was all part of his plan?