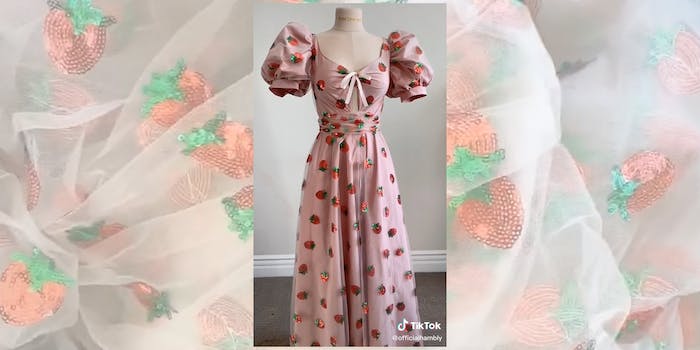 At the intersection of pandemic shopping and cottagecore, the strawberry dress

The strawberry dress has captured the hearts and minds and wallets of the internet. The pink tulle gown is more formally known as the Strawberry Midi Dress, by designer Lirika Matoshi. The $490 price tag makes it inaccessible for a lot of people—even more so during a pandemic—but it’s also available in size XL to XXXL, so it accommodates more body types (though not all). But why is this particular dress everywhere right now?

It’s been available since July 2019, when the designer posted it to Instagram. However, last summer was dominated by another coveted article of clothing: the Zara polka dot dress. Model Tess Holliday wore the strawberry dress to the Grammys in January (and reposted it on TikTok this week), and throughout the spring it showed up in influencer Instagrams, but a revival of the cottagecore aesthetic on TikTok this summer no doubt elevated the dress.

While cottagecore idealizes a more simple, from-the-land way of living—at least outwardly—there’s also a distinct sartorial aesthetic. The dress has been embraced and memed by lesbian (and “cottagecore lesbian”) spaces. As Vogue notes, it’s also been embraced by K-pop, fan art, and anime communities; there’s even an Animal Crossing dress crossover.

On TikTok, the hashtag #strawberrydress has more than 7 million views, and the collective thirst has become a meme. TikTok fashion analyst Biz Sherbert tells the Daily Dot the dress is a “quintessentially Gen Z garment, though at first glance it doesn’t seem to be designed for or marketed to teens or young adults,” because of its price.

“Gen Z’s purchasing decisions and the lifestyles that form around those decisions are heavily informed by nostalgia,” Sherbert says. “This dress is like a nostalgia bomb, without being corny or taking itself too seriously. Puffed sleeves, beautiful shaping around the waist that’s almost reminiscent of corsetry, a flounced A-line skirt, tons of tulle, and countless princess-y details. It evokes so many distinct historical eras and nostalgic expressions of ‘high’ femininity—the Renaissance princess, the Disney princess, the American debutante, the anime girl, the rosy-cheeked cottage-dweller, all in one dress.”

Unboxing videos are popular, and others have tried to make their own dress, which is part of a bigger DIY fashion trend on TikTok. But not everyone has experienced the serotonin hit. User deaddaygal showed off the dress but pointed out some of its inconsistencies, and lamented buying a knockoff, of which there are many.

The number of knockoffs or “dupes” for sale, including one via TikTok account Cottagecore Outlet, sparked debate about stealing from independent artists and designers, and its effect on workers. YouTuber Pixielocks addressed this issue in a recent video, explaining that the steep price tag also helps pay Lirika Matoshi’s all-women staff a living wage and supports an ethical business model, which knockoff or “fast fashion” sites often do not.

Still, the designer is seeing a massive uptick: Matoshi and general manager Ledri Mahmuti told NBC that sales have spiked 1,073 percent since this time last month.

Elsewhere, in lieu of buying the dress people photoshopped it onto celebrities like Zendaya and Harry Styles, fictional characters like Kylo Ren and Gollum, and Led Zeppelin.

Would this dress still be as popular if we weren’t living through a horrific pandemic with no end in sight? Possibly. But, unlike the Zara dress from last summer, its ascendance is tied more to aspirational ideas of fantasy and comfort—and a rise in impulse buying and targeted Instagram ads.

As Vice reports, people have also been mass-purchasing fish-shaped slippers from retailer Coddies this summer; before that it was roller skates and bike shorts. Colleen P. Kirk, an associate professor of marketing at New York Institute of Technology, told Vice this disruption of schedules and daily activities has led to more of a need for control in our lives: “For example, if our usual outlets for socializing and having fun are unavailable to us, we might be inclined to purchase things that are more fun and frivolous than we might otherwise purchase.” It’s having an impact on relationships, too: As MEL reported, women’s desire for this dress is coming up against men’s understandable sticker shock over the price tag.

But summer will give way to fall and this trend will likely fade. Lirika Matoshi makes matching masks, too, perhaps a more enduring purchase in these uncertain times.