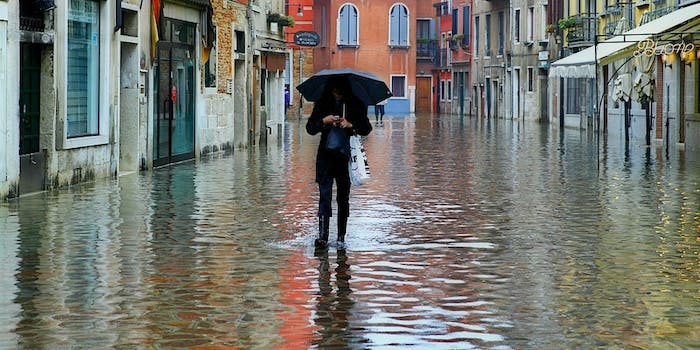 You’re never too busy to make sure you don’t wind up a plot in the next 'Final Destination' movie.

It’s a bird! It’s a plane! No, it’s a rollercoaster coming right at you.

That sounds like a nightmare scenario, but for one Cedar Point visitor, it was very real. Looking for a cell phone he misplaced, 45-year-old James A. Young reportedly leaped over a fence to locate the missing device. Unfortunately, he was entering a restricted area that was closed off for visitors’ safety, and Young was struck and killed by the Raptor, one of the Sandusky, Ohio amusement park’s most popular rides.

This is just one incident in an unfortunate trend of recent cell phone-related deaths. A recent report from the Governors Highway Safety Association found an uptick in pedestrian deaths between 2009 and 2013, a time when cell phone use has rapidly increased among Americans. In between the years of 2004 and 2013, the percentage of U.S. adults that own cellular devices shot up from 65 to 91 percent, according to Pew research. These numbers are why many argue that the two trends are correlated—people can’t put down their phones, and it’s actually killing them.

Cities like Philadelphia are recognizing this by taking proactive measures to get drivers to put away their handhelds while they’re behind the wheel. A new campaign implores Philadelphians to “Put. Phone. Down.,” while a similar advertisement in Florida reads: “Alert Today, Alive Tomorrow.”

While the dangers of texting while driving have been well-documented—causing an estimated 18 percent of vehicular deaths, according to the FCC—texting while walking is arguably even more dangerous. According to researchers at Stony Brook University, being distracted by your phone makes you 61 percent more likely to walk the wrong direction; this is true even though you actually walk faster while texting, making your aimless wandering even more dangerous. Unsurprisingly, nearly 40 percent of teens report that they’ve been struck by a car while walking.

CEO of Safe Kids Worldwide Kate Carr explained to the Today show that it might be even worse than we think. “Every hour of every day a teen is either hit and injured or hit and killed by a vehicle on the road,” Carr said.

Unsurprisingly, nearly 40 percent of teens report that they’ve been struck by a car while walking.

And it’s not just texting that’s the problem—the teens that had been hit by passing automobiles also reported that they’d been surfing the Web, chatting on the phone, or listening to music. According to Carr, the latter is a particular huge problem: “When you’re crossing the street with headphones on, you’re not hearing the ambient sounds around you. You’re not hearing those signals from cars or from approaching vehicles you simply may not see.”

The myriad distractions of one’s device pose even more risks to pedestrians than it does while you’re driving, simply because you have so many more opportunities to not look at where you’re going. If you’re at the wheel and on your phone, you’re most likely texting a brief reply to a friend. But while you’re walking, you can check your email, update Facebook, and even order delivery on GrubHub. (Full disclosure: I paid my credit card bill while walking through Chelsea yesterday.)

Thus, if a report from Virginia Tech Transportation found that “text messaging creates a crash risk 23 times worse than driving while not distracted,” imagine what that risk is like when the litany of diversions includes Snapchatting and taking a selfie. You might never have taken a photo of yourself behind the wheel, but in New York City, people regularly walk down the street with sticks designed for that very purpose. It’s not just incredibly irritating for other pedestrians—it’s an active safety risk to everyone around selfie stick users, including themselves.

Part of this phenomenon has to do with the fact that in 2015, we never have a reason to put away our phones. They’ve become a one-stop for everything we could ever need to do—from finding directions on Google Maps to searching for love on Tinder, and staying constantly engaged with what all our friends are doing on Facebook. It’s not just that Americans are buying up more devices—we also spend increasing amounts of time on them, with estimates showing that our cell phone time racks up 4.7 hours every day and 23 days a year.

Being distracted by your phone makes you 61 percent more likely to walk the wrong direction.

If you’re spending almost a month on your phone every year, that time is going to inevitably bleed over into other activities, leading to mobile multitasking during business meetings, when you’re at the table or on the toilet (don’t say you don’t do it), and even during your afternoon stroll. While reducing that time may be difficult, it won’t just make you a better worker or dinner date—the statistics show that putting your iPhone away might save your life.

We’ve all seen those YouTube videos where someone falls in a mall fountain or falls onto the train tracks because they’re too busy to look up from their phone, but you’re never too busy to make sure you don’t wind up a plot in the next Final Destination movie.

Photo via Roberto.Trombetta/Flickr (CC BY 2.0)