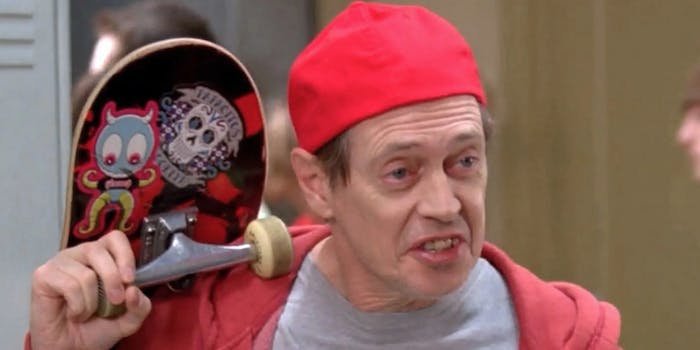 Steve Buscemi dressed as the ‘How do you do, fellow kids?’ meme for Halloween

It's surely one of the best celebrity Halloween costumes ever.

Is it fair to say Steve Buscemi’s 30 Rock character is one of his most iconic roles? Sure, the 63-year-old actor boasts a laundry list of impressive credits from Reservoir Dogs to Boardwalk Empire. But on social media, his face is now synonymous with the red baseball cap and hoodie he wears for one scene of 30 Rock, masquerading as a wildly unconvincing high school student.

We are speaking, of course, of the “How do you do, fellow kids” meme.

For Halloween 2021, Buscemi recreated his meme costume with aplomb, greeting trick-or-treaters on his New York City doorstep. It’s one of the best celebrity Halloween costumes we’ve seen in a while. Any rich person can afford to buy a high-quality costume, but Buscemi’s is simply fun: A self-aware joke whose only goal is to give fans a cute anecdote on Halloween night.

The meme originated in the 2012 30 Rock episode “The Tuxedo Begins,” with Buscemi playing a detective who goes undercover in a high school. It’s a parody of 21 Jump Street, the obvious joke being that Steve Buscemi’s character a) looks very old, and b) isn’t remotely in tune with youth culture.

Ironically, one of the people who took a Halloween selfie with Buscemi didn’t recognize him from the meme. Thirteen-year-old Stella Wexler Rush is way too young to have watched 30 Rock when it aired, but recognized Buscemi from his current TV show Miracle Workers. She only realized after asking for a selfie that he was the guy from the meme.