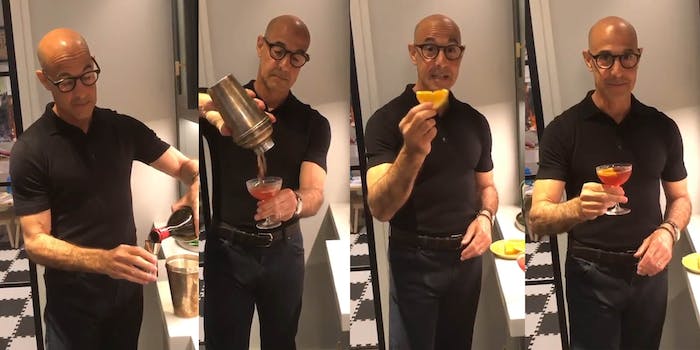 The actor's video got a lot of attention—for a reason.

It’s easy to say that we’ve reached the part of quarantine where Stanley Tucci making a Negroni has us all hot and bothered but let’s be honest: That would have been the case before the pandemic, too.

On Monday, Tucci posted a clip of him making wife Felicity Blunt (Emily Blunt’s sister) a Negroni, a three-minute tutorial in which the actor makes the cocktail “up,” meaning not on the rocks.

There were some that critiqued his Negroni prep, but the TTT (Tucci thirst trap) largely had the intended effect.

And it was edited to highlight the important parts.

Chris Evans entered the chat. Tell us more about the martini trailer, Cap.

And now live footage of all of us trying to replicate Tucci’s Negroni.