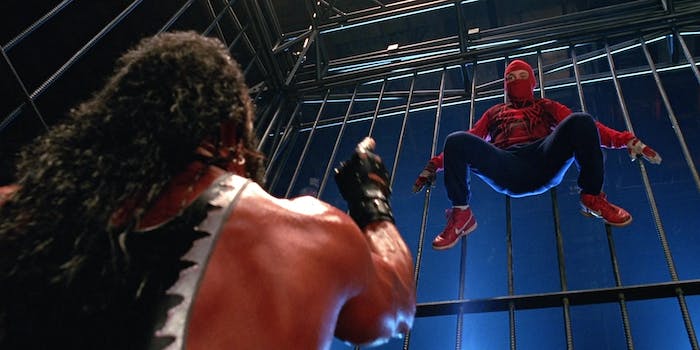 Nothing says “times have changed” like watching a movie from 20 years ago and realizing how normal it was to include homophobic jokes. Sam Raimi’s beloved Spider-Man (2002) is a classic example—but as one eagle-eyed fan noticed this weekend, the film’s dated humor is now being censored by some TV channels.

Twitter user @PaperPlaneTF sparked a conversation among Spidey fans by sharing a clip of the movie as it was aired on the UK channel ITV2. During the scene where Peter Parker tests his new superpowers against a professional wrestler, the original movie includes a homophobic taunt, with Peter quipping: “Cute outfit. Did your husband give it to you?”

But in this version, the “husband” line gets cut.

It’s not unusual for TV broadcasts to include minor edits, although they’re more often geared toward censoring cursewords. In the Marvel franchise, Disney+ has actually made much more significant edits to recent projects like The Falcon and the Winter Soldier, where violent scenes were digitally altered a few months after the show’s original broadcast.

Predictably, some commenters are complaining about this Spider-Man edit as an example of “woke” modern pop-culture—or mocking the idea of caring about it in the first place. (“This was essential to his character, cant believe they are harming Raimi’s vision.”) But most responses focus on something else entirely: The scene’s legacy as a meme:

In context, Spider-Man is trying to rile up a macho wrestler by implying that he’s gay. There was no particular demand for this line to be removed, but in recent years it did become a meme satirizing this type of casual homophobic humor. The most popular version involves the wrestler Bonesaw McGraw replying with a long paragraph saying his outfit was a gift from his husband, adding: “You’re on the wrong side of history, Spider-Man.”

As a result, there’s now a whole subset of homophobic Spider-Man memes, mostly poking fun at the idea of Raimi’s Peter Parker being kind of a dick. Bonesaw McGraw is portrayed as a proud gay man who is either in a loving relationship, or is mourning his dead husband, making Peter’s joke doubly hurtful.

If this Spider-Man movie (a Sony production) was available on Disney+, we might expect this edit to be made official. But for now this cut seems to be a one-off decision for a specific UK TV channel, removing a mildly offensive joke for modern family audiences. Not really a big deal, unless you’re seriously invested in Spidey meme history.