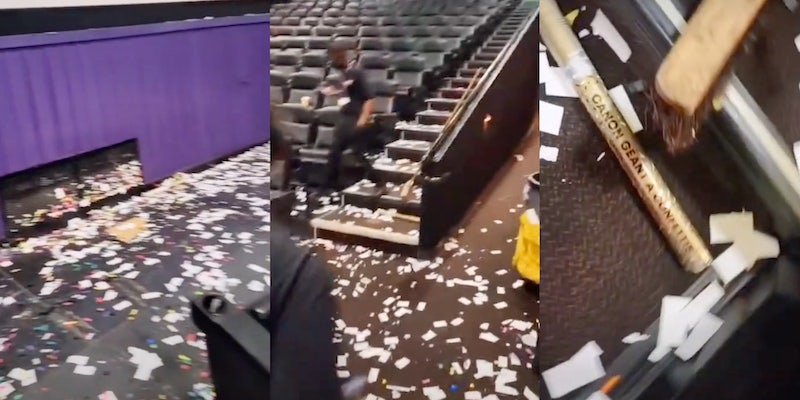 Spider-Man: No Way Home blew the box office away, charting amazing ticket sales even without taking into consideration the fact that we’re still dealing with a pandemic and moviegoers have been nervous to leave their homes.

But returning to public life has made people forget decorum throughout the past year, and it turns out the movies are getting the same treatment. TikToker @thatonecinemarkemployee showed the aftermath of a recent screening of the film in which the Cinemark theater was absolutely wrecked.

In the video, the floor is covered in not only popcorn, but slips of paper, presumably used as confetti. A device marked “canon geant a confettis” (giant confetti cannon) has also been left by the stairs, and multiple employees stand around waiting to clean up the nightmarish mess.

The TikToker specified in their caption that the chaos happened during a Spider-Man screening, and while a lot of folks have been on board with the hype for the film, TikTok viewers didn’t like seeing it taken to a destructive level.

“Just bc it’s their job to clean doesn’t give you the right to make huge messes,” @sweetkaos26 wrote. “I always throw any trash out no matter where I am. Manners.”

“It’s the ‘it’s not my job’ people that really always are the nastiest/dirtiest then get offended when you call them out. Like? Who raised you?” asked @yakuramichiri.

Some commenters also offered suggestions of varying degrees of helpfulness, ranging from cleaning up the mess with the help of a leaf blower to charging folks extra for rowdy screenings.

“I would charge every single credit card $10 extra,” @s_johnson_voiceovers said, while @undead_night41410 insisted, “you guys need a raise after this or hazard pay when a big movie like this comes out.”

As for the TikToker, they later commented, “I just want to make it clear that I love my job and this was in no way me complaining just thought it was funny enough to share.”

And there’s certainly humor in the disaster, but leaving that kind of mess for these workers to clean up sucks some of it right out. Or as one viewer put it, treating the chaos as the next installment of the franchise, “Spiderman: I wanna go home.”

The Daily Dot has reached out to @thatonecinemarkemployee via TikTok comment.