How a nickname for fire ants, became a political rallying cry.

Recently, the people of the world spoke out in one voice, declaring that what we now call “fire ants” should rightly be called “spicy boys.”  The Daily Dot extensively reported on—and, some say, killed—the excellent Spicy Boys meme.

But in the past couple of days, these boys of spiciness have taken on an aggressive new meaning within meme culture: Anti-Hillary Clinton memesters are calling the Democratic presidential candidate a “spicy boi.” 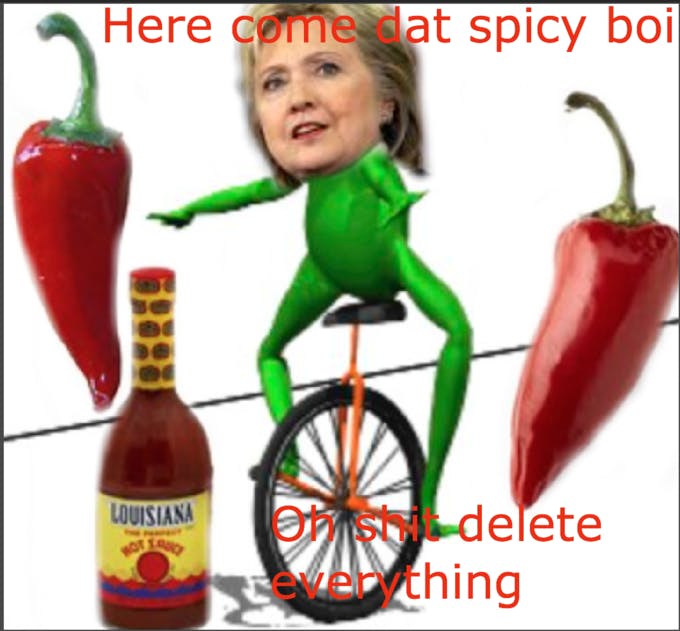 via Know Your Meme

How did a fun meme about fire ants turn into a crappy meme about Hillary Clinton?

The Los Angeles Times traces the connection back to the internet’s alt-right, a conservative movement characterized by people like former Twitter user Milo Yiannopoulos. The Times speculates that alt-rightists identified with a line in one popular “Spicy Boys” petition that mentioned “36 genders” and decided the Spicy Boys campaign was a critique of “out-of-control political correctness” around gender identity.

Never mind that the original creator of Spicy Boys told the Daily Dot, “In reality, spicy boys don’t identify as male or female. Usually, we refer to a spicy boy as ‘they,’ despite their biological sex. So let us stop making a big deal out of someone not being comfortable with using pronouns he/she. Is using ‘they’ really that hard?”

Once the Spicy Boys went alt-right, though, it was just a short jump to attacking Clinton on Instagram. The inciting incident was a post on iFunny.com calling for a “raid” on Hillary’s account.

It worked quite well: There are now tens of thousands of “Spicy Boy” comments—mostly spelled “spicy boi,” though—on Clinton’s recent Instagram photos. She is the internet’s new Spiciest Boi. Weirdly, though, the new conservative direction taken by Spicy Boys might just be a coincidence, a result of the natural overlap between meme-loving “shitlords” and Donald Trump‘s young internet constituency.

The self-described creator of the raid, Wesley (aka EpilepsyWarning), told NYMag.com’s Select All that the raid wasn’t political.

“Spicy boy is just for kicks,” he said.

The next phase of the raid, according to another rallying cry posted on iFunny, is to begin posting “RIP” on Hillary’s social media “in an effort to get Hillary herself to make a public statement that she isn’t dead.”

You might be overplaying your hand on that one, Spicy Boys. Probably just stick to memes in the future.