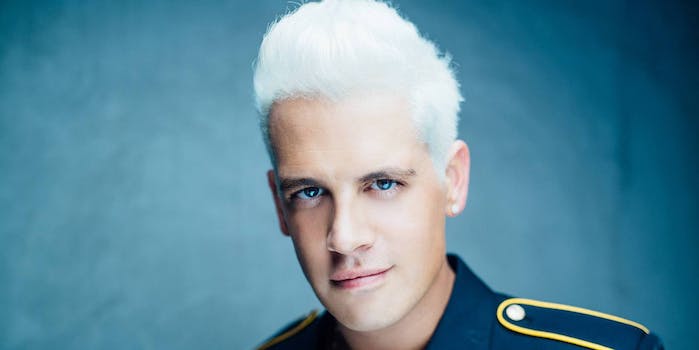 Twitter said 'no one deserves to be subjected to targeted abuse online.'

Milo Yiannopoulos, who helped lead the charge in getting Twitter users to attack Ghostbusters star Leslie Jones with racial epithets on Monday, has been permanently banned from the social media site.

Yiannopolous—currently the tech editor for the conservative site Breitbart.com—has previously been temporarily suspended from Twitter for his tendency to troll the internet, but this week, Twitter decided he’d gone too far. He got into this exchange Monday with Jones after she began to retweet her most caustic mentions.

@Nero I'm hearing this guy is a columnist how sad. Is this how he gets his readers thru supporting hate? I'm acting like a victim? Nice job

People should be able to express diverse opinions and beliefs on Twitter. But no one deserves to be subjected to targeted abuse online, and our rules prohibit inciting or engaging in the targeted abuse or harassment of others. Over the past 48 hours in particular, we’ve seen an uptick in the number of accounts violating these policies and have taken enforcement actions against these accounts, ranging from warnings that also require the deletion of Tweets violating our policies to permanent suspension.

We know many people believe we have not done enough to curb this type of behavior on Twitter. We agree. We are continuing to invest heavily in improving our tools and enforcement systems to better allow us to identify and take faster action on abuse as it’s happening and prevent repeat offenders. We have been in the process of reviewing our hateful conduct policy to prohibit additional types of abusive behavior and allow more types of reporting, with the goal of reducing the burden on the person being targeted. We’ll provide more details on those changes in the coming weeks.

In response, the hashtags #FreeMilo and #FreeNero popped up on Twitter on Tuesday night.

Meanwhile, it appears Jones is off Twitter for now.

I leave Twitter tonight with tears and a very sad heart.All this cause I did a movie.You can hate the movie but the shit I got today…wrong

Earlier on Tuesday, Yiannopolous—who established the Kernel, which was acquired by the Daily Dot in 2014—told Heat Street, “No, of course, I don’t have any regrets [about the attack on Jones]. But feminists on the other hand should have regrets that they have taught strong women that they are victims and attacked people for having different opinions to them on Twitter.”