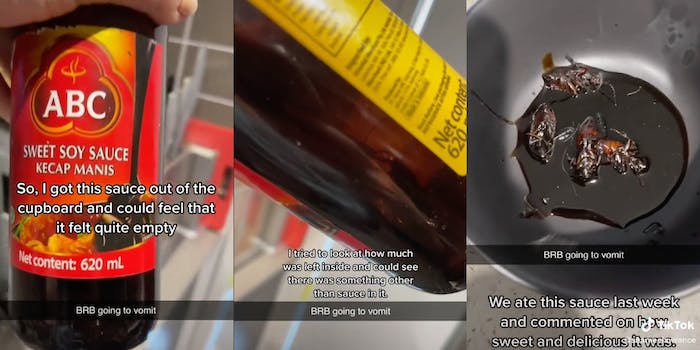 'I would faint and die if that happened to me.'

One TikToker has an important PSA for you: check your sauce bottles.

The TikToker, Sharnee or @sharneeellen, shared footage of what she found in her sweet soy sauce bottle. Her experience received over three million views and 680,000 likes.

Sharnee said in the TikTok that when she got the sauce out of the cabinet, it felt quite empty. When she tried to look at how much was left, she claims she saw something other than sauce but couldn’t make out what.

Naturally, she cracked the bottle open. She apparently found four dead cockroaches in a pool of soy sauce.

Sharnee said the bottle had never been left open, which means the cockroaches had been in the bottle the entire time she owned it. Her family had used the entire bottle and commented the week prior on how sweet and tasty it was.

Viewers were just as disgusted as Sharnee.

“New fear unlocked,” one user commented. Another said, “My bottle… in the bin never to eat again.”

Some said maybe it was a company secret.

More squeamish folks didn’t find it funny. One of them commented, “I would faint and die if that happened to me.”

The Daily Dot reached out to the sauce manufacturer.