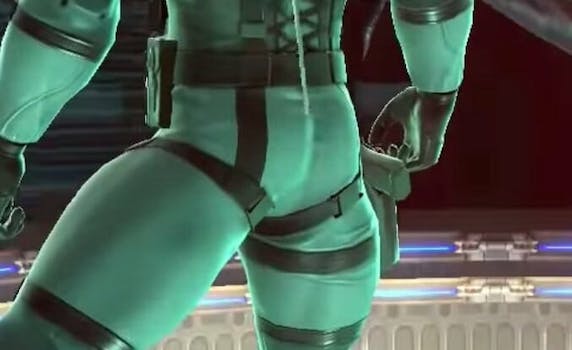 Where did it go??

Nintendo made a number of intriguing announcements at E3 2018, including a brand new Super Smash Bros. game. Super Smash Bros. Ultimate is coming this December to Nintendo Switch, and it’s bringing every single fighter who’s ever been in the game together once and for all (well, minus one overlooked character).

Rabid fans eager to play the new game took to social media to sing their praises and immediately discuss the roster, especially the re-introduction of Metal Gear Solid’s protagonist Solid Snake, who’s returning to the series for the first time since Super Smash Bros. Brawl, back on the Wii.

Instead of chatting it up about Snake’s moves or potential fighting applications, however, fans zeroed in on one particular thing: his derrière…or his lack of one, as it seems.

Everyone is here @Nintendo ? Then where is Snake's butt? pic.twitter.com/FtXiHL2LhV

Snake’s costume from Hideo Kojima’s classic stealth-action series finds him in a tight bodysuit that helps muffle his movements and offer him freedom of movement. It contours to his muscle-clad form, especially around some rather shapely buns. Unfortunately, as it turns out, the Super Smash Bros. gods have taken away those dangerous curves Snake has come to be known for.

And people just aren’t having it.

HOW DARE YOU NINTENDO NERFING SNAKE'S BUTT IN SMASH BROS ULTIMATE? MAKE IT BIG AND ROUND AGAIN! HAVE SOME RESPECT FOR MY HUSBANDO! pic.twitter.com/jPuWdzsVCP

Of course, physical alterations to familiar fighters from the series shouldn’t really come as a surprise. Super Smash Bros. Ultimate director Masahiro Sakurai stated during Nintendo’s E3 2018 showcase that many of the fighters would now be far more expressive than they used to be during fights, with additional voice lines, sound effects, and attacks that fans haven’t seen before. Sakurai didn’t specifically mention anything about changing up any physiques, but it looks like Snake’s rear end has become a casualty in the process of making a new Super Smash Bros. game from the ground up.

With all this furor about Snake’s butt, it’s kind of funny that little fanfare has been made about the fact that Metroid’s Samus Aran’s chest size has been reduced for her Zero Suit Samus appearance, in a very noticeable way.

Why is this? Well, let’s put it this way. We’ve got plenty of scantily-clad female heroines, so it just doesn’t seem like that big of a deal to make these alterations to Samus. What we don’t get enough of, however, is big ol’ delicious gaming beefcake behinds, as is evidenced by folks’ complaints about Snake’s behind, which many are only half-joking about.

Nintendo and other companies routinely make alterations to costumes and bodies like this when localizing games, especially when it comes to more sexually explicit costumes or simply outfits that reveal more than the companies may deem players being comfortable with. This type of censorship isn’t uncommon at all, though it doesn’t make a lot of sense that Snake’s butt has been given the nerf treatment when you look at it through a logical lens.

After all, it’s easy to see why it’s such an important pillar of the Smash Bros. and Metal Gear Solid community. If you’ve ever spent an extended amount of time playing the stealth action series, you’d know you see a whole lot of Snake’s posterior, especially when he’s crawling around trying to stay hidden from enemies’ sight.

It really does say something about the current climate of gamers that this uproar, as silly as it may be, about a male character is the focus of the changes having been made to the game, and it’s actually quite refreshing. Butts are a part of everyday life, and Snake’s just happens to be one amazing specimen that fans had gotten used to seeing.

me, yelling about snake’s butt this morning pic.twitter.com/vvcGPdnQJs

Maybe we’re all getting upset over this whole butt thing prematurely. Perfection, as we all know, takes time, and perhaps Super Smash Bros. Ultimate needs more time in the oven before Snake’s perfectly-sculpted keister comes out looking just like we expect that it should.

Or maybe they had to get rid of other things to bring Metroid’s behemoth enemy Ridley into Smash as a new playable character, as one fan posits.

Whatever the case may be, rest in peace, Snake’s butt. You are already sorely missed.

I'm sorry but not all of Snake has returned. He's no longer dual wielding those cheeks. Ain't got a shotgun with two barrels. This definitely ain't Naked Snake. Went from Solid to Sad. Ass went on stealth mission, good luck finding it. pic.twitter.com/V1WeM5VKIM