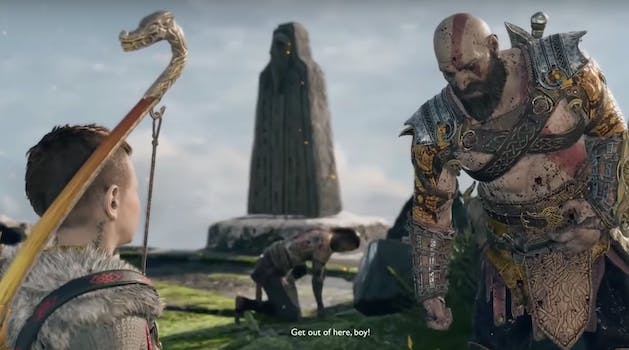 Kratos' nickname for his son is making everyone laugh.

God of War is a grim adventure with very few moments that could be considered comedic, by any means. Sure, the PlayStation 4 exclusive game can coax a giggle out of you if you happen to catch one of warrior Kratos’ awful “stories” he shares with his son Atreus, or tune into one of the non-sequiturs he calls a “joke.”

But there is one funny aspect of God of War that’s stuck with nearly every single player who’s spent time with it. Kratos is a gruff individual who isn’t really the fatherly sort. While the game is rife with some unexpectedly tender moments, you couldn’t exactly call most of Kratos and Atreus’ interactions touching. Kratos’ nickname for his son, however, has had fans giggling ever since the game dropped. Kratos likes to call Atreus “boy.”

Rarely do you hear the word “Atreus” spew forth from Kratos’ burly, beard-clad mouth. Instead, he prefers to bark “BOY!” when he needs his son’s attention. It’s really quite adorable if you think about it, although a little demeaning. Atreus snaps to attention every time, too. Wouldn’t you?

As expected, the internet jumped on this fun little tidbit like Atreus on an in-game enemy. It’s understandable, though, because the way Kratos spits “boy” is fascinating, really. One would think there’d be a limit on just how many ways one word could be enunciated, and yet Kratos’ voice actor Christopher Judge appears to have created an entirely new language from that one word alone.

Whatever the reason for this scripting decision, whether it’s an attempt to showcase Kratos’ love for Atreus in a manner befitting his character or just a fun Easter egg from the writers, people love it—hence, the “Dad of Boy” meme. Once the game was unleashed into the wild to near-unanimous positive critical praise, it was off to the races with a cavalcade of new edits and fanart that spawned from Kratos’ endearment of choice. It looks like “Dad of Boy” is here to stay, a collection of fan creations that perfectly encapsulate the spirit of Kratos as a “sad murder dad.”

KRATOS: boy. translate these runes
ATREUS: they say "updog," father
KRATOS: what do you know of this creature?
ATREUS: what creature?
KRATOS: "updog," boy! what is "updog?!"
ATREUS: not much, father. what is up with you?
KRATOS: *eyes narrowing* i will stay alert for this "updog"

Of course, Kratos doesn’t just call Atreus “boy” out of the blue. It’s usually connected to some sort of command, like “go grab this,” “go do that,” or “read this.” Kratos needs help from his son sometimes to read various signs, inscriptions, and other postings throughout God of War…and a ton of other things, too.

The new God of War is amazing. I want a PS4 now.

It may be difficult for anyone who hasn’t played 2018’s God of War or any of the prior entries to understand why this whole “boy” thing is actually funny, but it all comes down to sentiment and the almighty dad jokes, which seem exactly like his speed of humor. Plus, seeing Kratos, the former literal god of war, taking on fatherhood, is something players never thought they’d have a glimpse at.

The “Dad of Boy” memes have nearly gone full circle from imitating Kratos and Atreus’ exchanges and mimicking the dad jokes that might spawn from a father-son bonding session between the two. The memes have become the dad jokes by now. It’s uncanny.

With the recent addition of Photo Mode, which gives you additional control over image composition in-game, fans can now get to work on even more hilarious shots. This game was tailor-made for driving home just how much Kratos does care about his son, even if all he does is bark “boy!” at him all day.

This certainly won’t be the last we’ll hear from Kratos and his son, as we can more than likely look for a sequel to the 2018 reboot in the coming years, but no matter what happens between now and then, there’s one thing that will always stay the same. Atreus is always going to be “boy” to legions of God of War fans around the world. For better or for worse, Kratos is now “Dad of Boy.” You’ll hear no complaints from us on the matter.