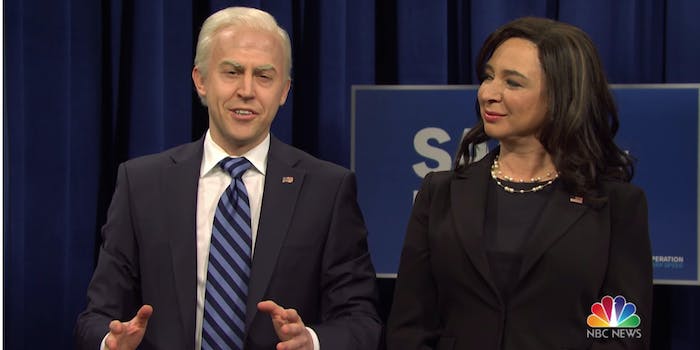 'He should've been cast for the part from the get-go.'

Jim Carrey on Saturday afternoon announced his departure from Saturday Night Live. And fans approve of who took over the role of President-elect Joe Biden from him.

“Though my term was only meant to be 6 weeks,I was thrilled to be elected as your SNL President…comedy’s highest call of duty. I would love to go forward knowing that Biden was the victor because I nailed that shit. But I am just one in a long line of proud, fighting SNL Bidens!” Carrey, who made his debut as SNL’s Biden on Oct. 3, announced in a tweet on Saturday.

“I’m like Colonel Sanders. Every time you see me, I look like a different guy,” Mofffat’s Biden replies.

Viewers are lauding Moffat’s performance and comparing it to that of Carrey’s, which was criticized for being too “over the top” and garnered demands for the show to replace him.

“Alex Moffat as Joe Biden is much more natural and fluid, and he should’ve been cast for the part from the get-go,” one viewer tweeted. “Glad they made the switch.”

“Alex Moffat’s Biden is somehow both a bit underwhelming and A THOUSAND TIMES BETTER THAN JIM CARREY’S. #SNL,” another said.

Watch the full cold open below: