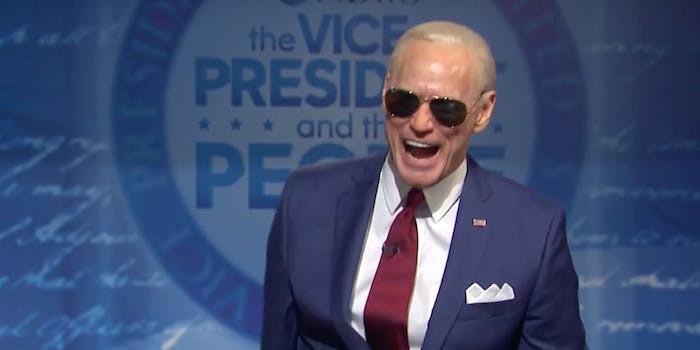 Coming off of the dueling town halls for President Donald Trump and former Vice President Joe Biden, it was inevitable that Saturday Night Live would poke fun at both. However, it was comedic legend Jim Carrey’s version of Biden that people aren’t loving.

SNL recreated the town halls through the lens of people who flipped back and forth between the two channels. The recreation of NBC’s controversial town hall with Trump (played by Alec Baldwin) was given a thumbs-up. But the recreation of ABC’s town hall with Biden (played by Carrey) left people yearning for something different, like Jason Sudeikis or Kate McKinnon playing Biden instead.

“I say this with love and respect: it’s not too late to replace Jim Carrey and get someone else–anyone else–to play Joe Biden,” tweet Charlotte Clymer. “Let Kate McKinnon do it. She’s already there, and she’ll nail the role. Have mercy on us all.”

“Jim Carrey” began trending on Twitter, and the topic was flooded with negative review after negative review. “His impression is so disconnected from Biden it’s absolutely painful to watch,” one user wrote of Carrey’s portrayal.

A few think Carrey is not the problem. “Everyone is blaming Jim Carrey for portraying Joe Biden as boring and senile. But Saturday Night Live is run by NBC,” @eugenegu. Their cold open sucked because it was obviously biased towards the town hall NBC hosted with Trump. It’s a conflict of interest. The media does this all the time.”

However, the majority of viewers believe Carrey is simply too chaotic to play Biden.

Is Carrey the right person to play Biden?

Decide for yourself. Here is the entire cold open: