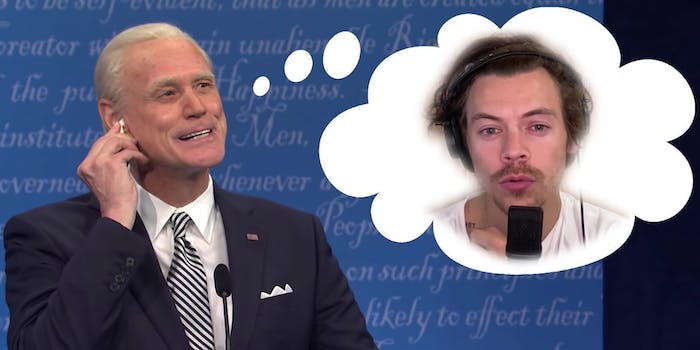 The season premiere of Saturday Night Live (SNL) opened with a riff on Tuesday’s painful first presidential debate. As many commenters on YouTube noted, it was somehow less absurd than the real debate.

The skit was still pretty ridiculous, as well as rough to watch if you’re extremely tired after this insane week of news. Alec Baldwin, as President Donald Trump, began by interrupting Beck Bennett’s Chris Wallace—and he continued to interrupt throughout the opening. He also promised that he took a COVID-19 test pre-debate; a reference to the fact that Trump now has COVID-19. But the highlight was Jim Carrey debuting his Joe Biden impression. He did a good job…as another Jim Carrey character. On Twitter, many users compared his performance to that of his lead role in the 1994 film The Mask. Throughout the debate, Carrey is having a dialogue with himself and tries to talk himself out of getting too angry at Baldwin’s Trump.

At one point, Carrey puts in an earpiece to listen to a Harry Styles meditation tape to calm himself down—with a short cameo from Styles himself. (This part was a big hit with Styles stans.) Towards the end, Maya Rudolph finally makes an appearance as Sen. Kamala Harris (D-Calif.), Biden’s running mate. But she delivers this cringey line: “America needs a WAP: Woman as President.”

The cold open ends with Biden “muting” Trump with a remote, to applause and cheers from the audience. “Isn’t that satisfying?” Carrey’s Biden asks. “Just not to hear his voice for a single goddamn second.” The whole skit feels longer than it actually is, which is never a good sign. November can’t come soon enough.