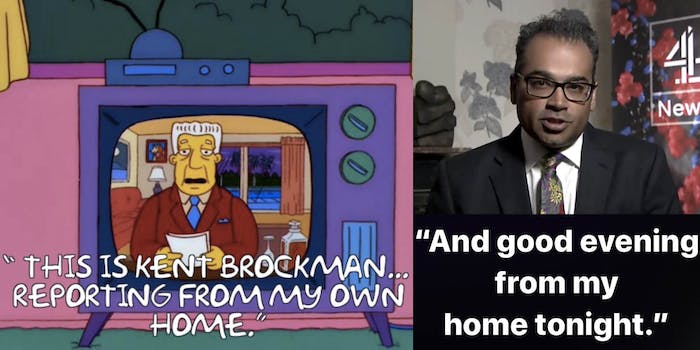 Did ‘The Simpsons’ news anchor predict the coronavirus self-quarantine?

Fans are pointing to a clip of 'Simpsons' news anchor Kent Brockman from a 1998 episode.

The Simpsons has run for 31 seasons so far, which means the show is bound to cover a whole lot of ground, plot-wise. So it’s not really that surprising when fans find things in old episodes that seem to match up to current events.

Still, there’s something too eerie about the idea of a beloved sitcom predicting the future to let it slip by without comment.

As millions of folks around the world stay locked up in their homes in an attempt to slow the spread of coronavirus, many jobs are shifting to become work from home situations, including some TV productions.

In fact, even TV journalist Krishnan Guru-Murthy presented the news from home last week on Channel 4 in the U.K.—something that happened in an episode of The Simpsons back in 1998.

In that episode, news anchor Kent Brockman also has to present the news from home after being forced into self-isolation.

“This is Kent Brockman reporting from my own home in accordance with the new curfew for anyone under 70,” Brockman says.

Of course, the scenario in the sitcom is actually one in which people under the age of 70 are given a late-night curfew, rather than one in which everyone (particularly those OVER the age of 70) is staying in their homes to avoid a potentially fatal disease. But the side-by-side comparison of the frames still makes for an amusing comparison, at least.

The Twitter user who originally drew attention to the similarity, TV critic Scott Bryan, was actually doing so to make fun of all the reaching some fans of The Simpsons are doing to draw parallels between the show and reality during this time of extreme boredom and quarantine.

Folks have pointed to scenes from The Simpsons as premonitions for years, but the coronavirus kicked sleuths into high gear yet again after it was remembered that a 1993 episode saw a deadly Japanese flu find its way to the town of Springfield via a shipment of juicers.

As our reality starts to resemble fiction more and more during these weird times, it’s likely more snippets from The Simpsons will be pulled and parallels discovered and dissected.

We’re all bored out of our minds sitting at home alone all the time, let us have this.