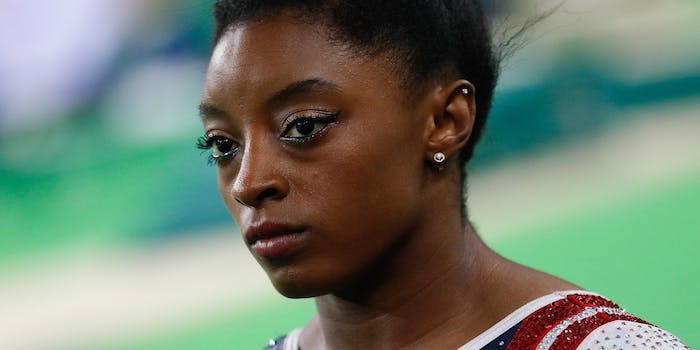 ‘I WAS ONE’: Simone Biles responds to critic who accused her of not caring about foster kids after she shares pro-choice Instagram

She shut down a user who accused her of saying that foster children's 'lives are worth nothing and are better off dead.'

Writing on Instagram Stories, Olympic gymnast Simone Biles has clarified her stance on abortion: “I already know this is going to start the biggest argument & may even lose followers BUT. I’m very much pro choice.” Not for the first time, she used her platform to speak out about a sensitive and divisive topic, sharing her perspective as a young Catholic woman who spent part of her childhood in the foster care system.

Responding to the common argument that pregnant people should carry unwanted fetuses to term and then put their babies up for adoption, Biles wrote, “it’s not that easy… foster care system is broken & it’s TOUGH.”

Biles and her siblings were taken into foster care due to her mother’s substance abuse issues, with Biles describing chronic neglect and hunger when she was still living with her biological mom. After a period in foster care when she was still a toddler, Biles was taken in by her maternal grandfather and his second wife, who later adopted her and her younger sister Adria. She has real, personal expertise on the difficulties faced by children in America’s foster system, discouraging the idea that it’s easy or simple for a baby to be adopted.

Since abortion remains a hot-button topic, Biles’ comments inevitably inspired some pushback—including one comment that she directly responded to on Twitter. After a Twitter user accused her of saying that foster children’s “lives are worth nothing and are better off dead,” Biles accused them of willfully misinterpreting her comments.

“I have forever & will continue to support foster kids. AS I WAS ONE,” she wrote, clarifying that she was merely publicizing her pro-choice stance and raising awareness about the complexities of foster care.