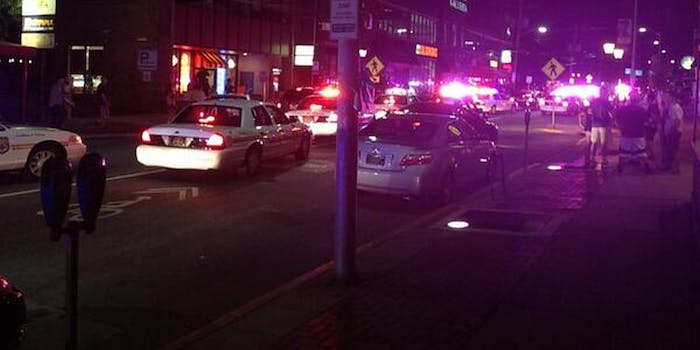 When the popular party film series showed up in Delaware, thousands of students got a little too "shmacked."

The popular YouTube series “I’m Shmacked,”has captured scenes of drinking and debauchery on dozens of university campuses, but what happened during its stop at the University of Delaware Monday night might be a first.

Thousands of Delaware students rioted in the streets of Newark after showing up to be part of the latest Shmacked party film. They partied so hard, in fact, that police got involved and a car was apparently “burned in effigy,” BroBible wrote.

I refuse to believe whats actually going on at the University of Delaware right now pic.twitter.com/3JQUkE9pUU

One student broke down the scene for BroBible:

“[S]o basically last night imshmacked starts tweeting and shit that ther coming and want to party hop, its fraternity dry period rn bc of rush so [redacted] was the only house to step up, so literally packs of hundreds of people roll up to [redacted] shit faced and start raging one anony t breaks up and those people plus people heading to the party and other drunk kids on the street start forming this giant crowd and start chanting and yelling and next think uk cars are burning and all traffic stops for the mob of thousands. It makes its way down main street and a barrage of cops, literally 50 cars from here and other counties take over main street with riot shit and k9 units, everyone screaming fuck the police and what not and theres kids getting arrested and titties flying everywhere. “

“I’m Shmacked,” named for a term that describes drinking to the point “of not even being able to stand up,” rose to prominence in 2012 after ABC’s Nightline ran a segment on its founder, Jeffrey “YoFray” Ray. At the time, Ray had filmed parties at West Virginia University, the University of Texas at Austin, and the University of Wisconsin-Madison.

“Everyone loves them,” Ray told ABC. “From adults looking in, it just looks like a bunch of riff-raff.”

Since then, “I’m Shmacked” has been featured in the New York Times and on countless local news stations. Its list of schools now includes Syracuse University, UCLA, University of Michigan, Arizona State, and New York University.

“I like it,” said college student Kevin O’Keefe during a local news segment on “I’m Shmacked. “It’s a movement.”

No arrests have been reported in Delaware following the riot. It took police more than two hours to disperse the crowd, the News Journal reports.

The Shmacked crew seems to consider the event a success.

“udel deff got their moneys worth,” Ray tweeted after the event. He also used the hashtag “#notourfault.”

He plans to film in Miami tonight.