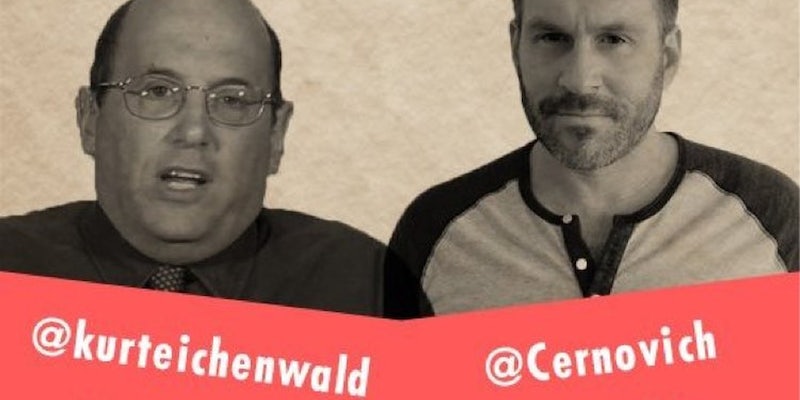 The tournament was down to the wire, with Eichenwald edging past in the final hours of voting and ultimately claiming 51 percent of the 8,563 votes cast.

Eichenwald, the Newsweek writer who started as a relatively unknown 12th seed before busting everyone’s brackets, is the sort of centrist Shit Account voters despise. He’s known of late for the time he bragged about telling a third-party voter, “You’re lucky it’s illegal for me to punch you in the face,” and for an incident involving alleged threats against a young journalist.

It also didn’t hurt that his account was a spectacular fireworks display of crap throughout the tournament, ensuring he was never off of voters’ radars.

Earlier this week, Eichenwald made the unprecedented play of quitting Twitter during the final rounds of tournament, claiming a troll gave him a seizure with a flashing GIF.

This was described by Shit Account commentators as a “breathtaking” meltdown:

Ultimately, the play paid off, pushing Eichenwald past No. 1 seed Arthur Chu, the performatively woke Jeopardy! guy, and into the finals against Cernovich, another No. 1 seed.

Cernovich doesn’t self-identify as alt-right, but the white supremacist movement has clung to him as a leading figure ever since he took up the banner of Gamergate in 2014. Since then, Cernovich has built his brand as a vocal Trump supporter and manosphere figure, and used it to promote his book, Gorilla Mindset.

His Trump boosterism didn’t hurt him with the overwhelmingly leftist Shit Account voters, but a couple of incidents in the final week of the tournament made this an impossibly tight race. First, he tweeted in support of the alt-right’s Rogue One boycott, claiming it was a success that cost Disney money.

Rogue One didn’t open as big as the last Star Wars, which was part of the main film series and the first new installment in seven years, and also cost $100 million more to make. The whole boycott is pretty silly.

Meanwhile, Cernovich launched a Twitter campaign against comedian and video editor Vic Berger, accusing Berger of pedophilia in what appears to be a Pizzagate-like conspiracy theory.

Berger has made fun of Cernovich in the past, but now, as New York Magazine reported,

Cernovich has responded by escalating their insult war into accusations of horrible crimes, and weaponizing his hundreds of thousands of followers into a sustained campaign of harassment and threats. This is the 2016 internet.

The incident has provoked discussion about the role of libel laws in the Twittersphere of 2016, where anyone can claim they were just joking or trying to raise questions. Meanwhile, Berger says he’s quitting Twitter while he evaluates his legal options against Cernovich, who is himself a lawyer.

Cernovich’s innovation of what appeared to be a bulletproof campaign of speculation and innuendo against someone who annoyed him made him an early favorite against his final Shit Account opponent, Eichenwald.

But ultimately Eichenwald’s “Shitterella Story” proved too much to overcome for Cernovich, dubbed “the thinking man’s cuck” by tournament organizers.

Here’s a look back at the full tournament: