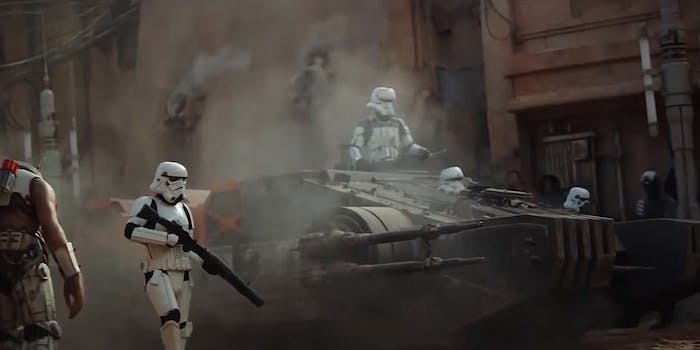 The Force apparently isn't with the pro-Trump 'Star Wars' boycott.

One of Donald Trump‘s most vocal supporters has apparently been banned from Twitter after posting anti-Semitic comments about Disney’s upcoming Star Wars film, Rogue One.

Jared Wyand was part of an effort by Trump stans to #BoycottStarWars over the film’s alleged anti-Trump bias, as well as comments made by a pair of Rogue One writers. But it seems he took the argument too far, escalating from allegations of bias to allegations of a Jewish media conspiracy and “white genocide”:

A Trump fansite called Magafeed lamented the suspension of Wyand’s account, writing, “Jared joins a list of well respected deplorables, including Ricky Vaughn and Milo [Yiannopoulos], who have been banned by Twitter.”

According to Magafeed—which is nakedly biased and ought to be taken with a grain of salt—Wyand wasn’t banned for his antisemitic Star Wars tweet. The site claims he was punished for his most recent tweet, expressing support for Geert Wilders, the Dutch far-right politician who was just convicted of inciting racial discrimination.

Twitter hasn’t commented on the ban, so it’s impossible to say which of Wyand’s remarks against Muslims and Jews finally resulted in the suspension of his account.

Now a #FreeJared campaign has sprung up among Twitter’s self-identified deplorables:

Meanwhile, the Star Wars Boycott, which kicked off after screenwriter Chris Weitz declared that Star Wars was “against hate,” continues.

This interpretation of the Star Wars legend didn’t sit well with the Trump-supporting White Genocide crowd, who interpreted it as an attack on Trump and on white people. In a classic internet game of telephone, the boycotters turned these comments about the overarching series into allegations that Rogue One would have explicitly anti-Trump content.

The last starwars was soo bad and boring that I had already decided to #Dumpstarwars and with my pro-trump stand, it even feels good!

As some are pointing out, though, boycotting one of the most popular movie franchises of all time for being against white supremacy doesn’t exactly put the boycotters in a positive light:

If Star Wars — an obvious allegory about Nazism — feels like an attack on your candidate, the problem isn’t with Star Wars… #DumpStarWars

They’re not denying Trump is the Empire, they’re just saying the Empire was good.

Spoiler: if you're trying to boycott Star Wars, you're not the Rebellion.