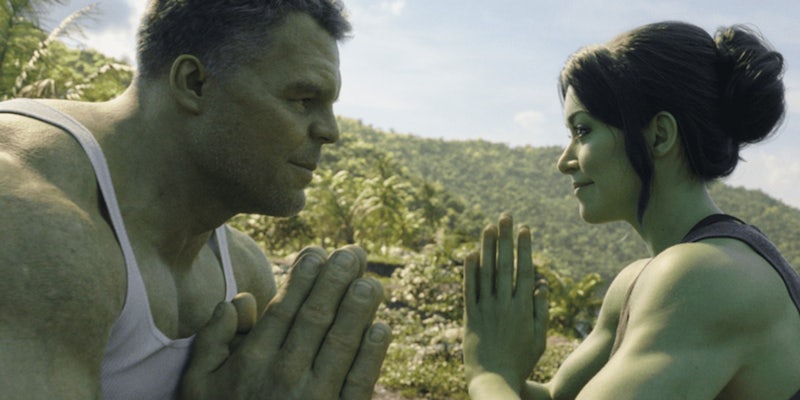 Disney’s She-Hulk: Attorney at Law premiered to relatively positive reviews last week—albeit with some expected criticism for the show’s CGI. But one particular scene seems to be grabbing people’s attention after clips and screencaps spread on Twitter, focusing on the anger Jennifer Walters/She-Hulk feels as a woman in a sexist world.

The scene shows Jennifer and her cousin Bruce Banner (aka the Hulk) discussing their views on anger management. Bruce has struggled for years with his rage issues and wants to teach Jennifer to meditate and control her newfound strength. Meanwhile, Jennifer offers a different perspective, focusing on the way women are socialized to suppress their rage. “I’m great at controlling my anger,” she argues. “I do it all the time. When I’m catcalled in the street… When incompetent men explain my own area of expertise to me…”

Depending on your perspective, this is either a smart feminist insight from Marvel, an insult toward Bruce Banner’s much-more-valid reasons to be angry, or simply a cringeworthy example of didactic screenwriting.

Superhero stories routinely include this kind of sociopolitical allegory, and as such, a lot of the responses to She-Hulk are very predictable—especially the backlash against any sign of feminist commentary. This scene is low-hanging fruit for far-right pundits like Matt Walsh, who labeled She-Hulk a “whiny feminist superhero” with “no audience.”

However, the discourse around this She-Hulk scene isn’t exclusively a two-sided debate, with sexists on one side and feminists on the other. Much of the criticism is about how the scene is framed, both in the way it compares Jennifer’s anger to Bruce’s (he’s not exactly had it easy!), and the way it potentially uses a feminist talking-point in a cynical manner.

Out of context, this scene suggests that Jennifer is better at regulating her anger than Bruce, thanks to years of practice withstanding day-to-day sexism. Some viewers saw this as a relatable statement, while others criticized the idea of putting catcalling on the same level as Bruce’s traumatic backstory.

It’s easy to see why this scene was so divisive, but a lot of the resulting commentary actually ignores what happens afterwards: Jennifer hulks out. So she obviously isn’t in control of her anger, and the show isn’t presenting her as superior to Bruce’s years of experience at reining in the Hulk. Five minutes later, she’s yelling, “Enough of your dialectical behavioral bullshit!” and flinging him across a forest. It’s still a comedy with a messy, screwed-up protagonist.

Overlapping with this debate over She-Hulk’s feminist credentials, this scene sparked a more general criticism about TV writing, with some commenters speculating that modern TV shows intentionally engineer certain scenes to go viral on social media.

“Is there a name for this type of tv dialogue that’s meant to be a viral screenshot on twitter,” wondered one popular response, while another described it as “a cynical monologue designed to go viral,” which only exists “to make you think the show is actually about something.”

Some Marvel fans also drew comparisons with the show Jessica Jones, whose title character struggles with anger and substance abuse in the aftermath of an abusive relationship. It’s undoubtedly a more sophisticated show, and She-Hulk’s catcalling monologue looks pretty facile compared to Jessica Jones‘ gritty social commentary. With different goals and target audiences, these two shows represent different sides of the MCU: An edgy, now-defunct era of adult spinoffs on Netflix, versus the mainstream PG-13 vibes of the Disney+ franchise.

Much of this She-Hulk controversy stems from the conflicted nature of “progressive” Disney products. There’s no denying that certain Marvel titles have a real cultural impact (Black Panther; Ms. Marvel), both in terms of representation and in introducing certain topics to mainstream discourse. But there’s also something inherently absurd about Disney marketing itself as an inclusive force for good.

Disney is still out there supporting homophobic policies and facing accusations of worker exploitation. So when the studio releases something with clumsy social commentary like this She-Hulk monologue, a lot of people immediately see it as a cynical ploy, catering to progressive audiences while papering over Disney’s real-world flaws.