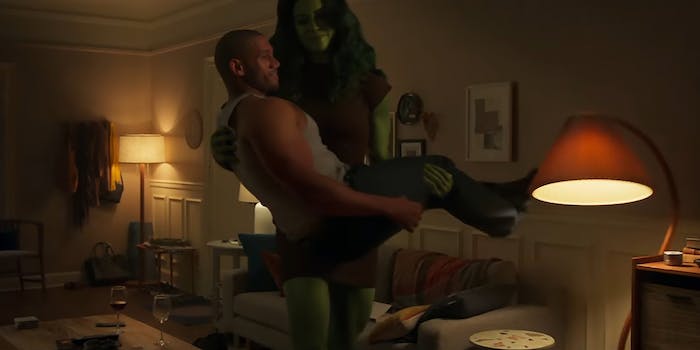 ‘Marvel I’m begging you to give VFX artists enough time to do their jobs’: Fans call out ‘She-Hulk’ trailer for bad CGI

MCU fans are typically very forgiving of the franchise’s flaws, which makes the reaction to the new She-Hulk trailer all the more surprising. People really do not seem impressed.

She-Hulk: Attorney At Law will be the eighth MCU show on Disney+, starring Tatiana Maslany as Jennifer Walters, a lawyer (and cousin of Bruce Banner) who turns into She-Hulk. Echoing the comics, the trailer positions She-Hulk as a combination of superhero antics and a slightly dated style of comedy/drama about a 30-something gal trying to balance relationships and a career.

It’s pretty much what you’d expect, except the CGI is noticeably shaky, prompting fans to wonder what went wrong.

These VFX issues are drawing comparisons to Hulk’s role in the movies, which benefited from a bigger budget. Hulk also primarily stars in action scenes, whereas She-Hulk spends more time hanging out in TV-friendly close-ups. This draws attention to the Uncanny Valley vibe of her appearance, which places Tatiana Maslany’s normal-sized head (painted green) atop a giant body, with what appears to be partially-CG hair.

She-Hulk relies upon one of the trickiest things for VFX artists to do: Create a realistic human body that looks “normal” alongside non-CGI characters. Sized up from 5’4″ (Maslany’s natural height) to WNBA proportions, She-Hulk has to move naturally, interacting tangibly with her co-stars and surroundings. Back in the pre-CGI days, the 1970s Incredible Hulk show simply cast different actors to play Bruce Banner and the Hulk—which might have been a better strategy here.

Another divisive issue is She-Hulk’s body shape. Her appearance has changed a lot over decades of comics, but in recent years she’s tended more toward the “Hulk” end of things, i.e. big and muscular. The TV show conforms more closely to conventional beauty standards, giving She-Hulk a slim build with a narrow waist.

A lot of fans object to this, either because it comes across as a sexist double standard—or because they just want to see an enormous green lady who can crush you like a bug. (Fair enough!)

Debates over bad CGI are now the main discussion topic around She-Hulk, with more optimistic fans arguing that Disney has three months to polish the show’s CGI. This idea often comes up when trailers are criticized for clumsy special effects, but it’s rare for it to actually happen to a satisfying degree. (Sonic the Hedgehog, which was delayed for months to retool Sonic’s appearance, is the most famous example.)

The one time this has really been an issue for the MCU was 2017’s Inhumans TV series, which improved its VFX following the trailer’s catastrophic reception online—but was still widely criticized when it came out, becoming the franchise’s biggest flop. Here’s hoping She-Hulk avoids that fate!