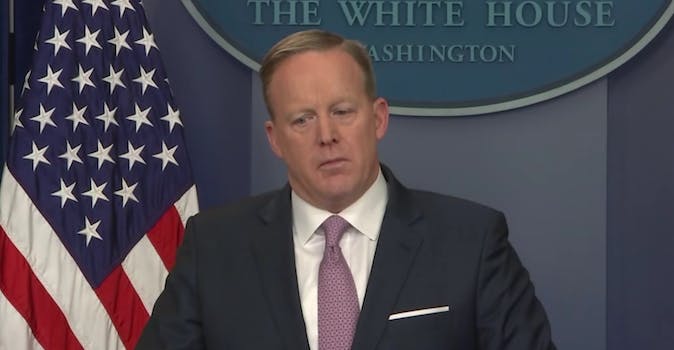 Reportedly on the outs with Trump, Catholic Sean Spicer did not meet the pope

Was this a way to punish Spicer?

No one, in the first four months of the tumultuous Trump administration, has publicly gone to bat for President Donald Trump quite like Sean Spicer.

Sure, that’s the nature of his job as press secretary—and his efficacy can be debated—but day in and day out, he bore the entire brunt of the media’s pointed questioning of the administration. And he’s been the focus of SO MUCH internet scorn.

So this story is just sad.

According to CNN, Spicer, who is Catholic, was not allowed in Trump’s meeting today with Pope Francis. Included were Hope Hicks and his director of social media, Dan Scavino, as well as Ivanka and Jared. Also in the audience were Rex Tillerson and H.R. McMaster.

From CNN. No matter what you think of Spicer, this will just bum you out.

Asked about Spicer not being included in the group that met the Pope, a source close to the White House said: “Wow. That’s all he wanted.”

The White House said that the Vatican was very strict about the number of people allowed in the meeting, but the source added that it should definitely be seen as a “slight” from the president. Speculation has been rampant in Washington, D.C.., that the president is planning on replacing Spicer soon.